Nojeok Hill, My View from the Top – History of the Area Around Nojeok Hill

On the main intersection in Seongpo-Dong, across from Star Plaza and about a five minute walk from the base of Nojeok Hill is a historical marker: 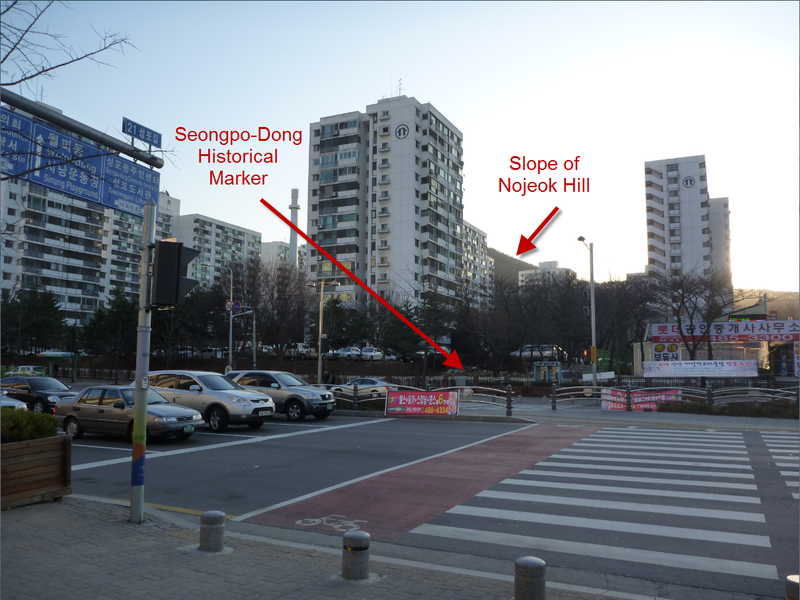 I've passed it many times but hadn't bothered to read what it said until recently. It's a fascinating story about the history of our neighborhood. Here are a couple photos of the marker, along with its translation: 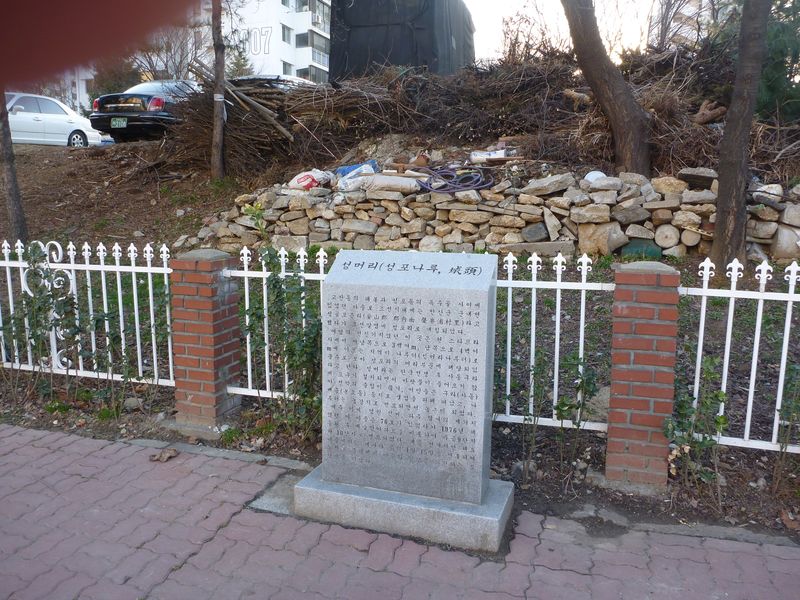 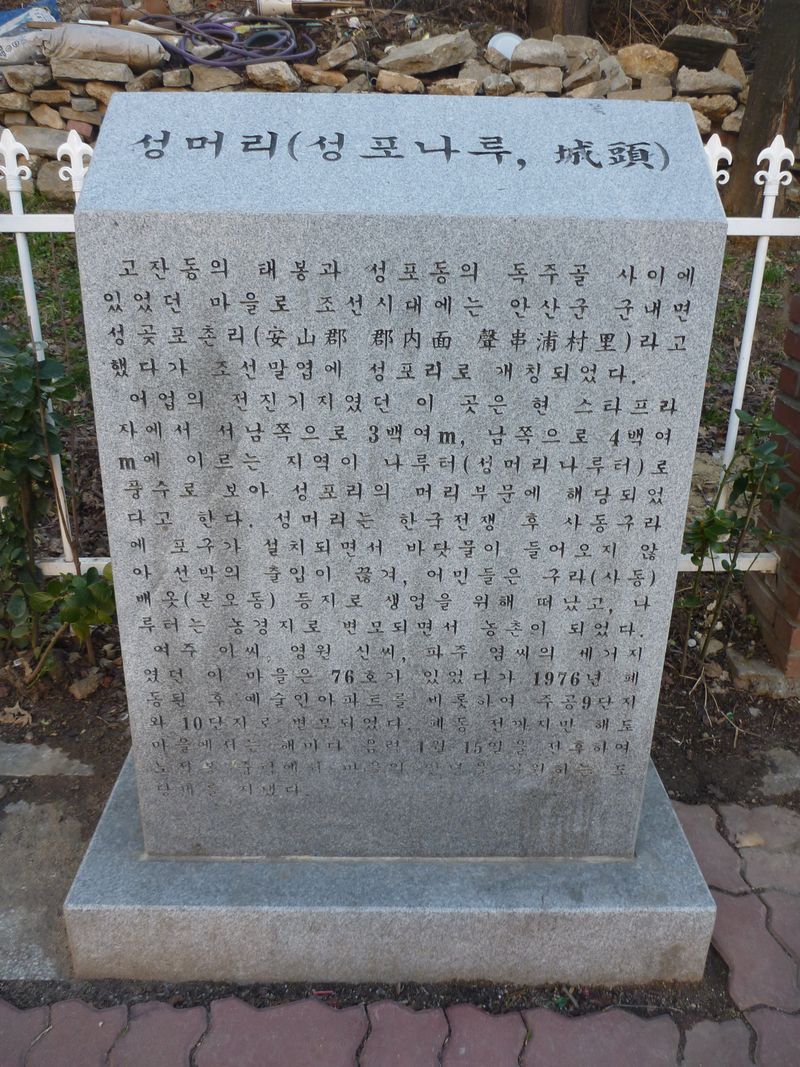 Situated between Tae Hill of Gojan-Dong and Dokju Valley of Seongpo-Dong, this village in Gunnae-Myeon, Ansan-Gu was called Seong-Got-Po-Chon-Ri in Choseon times and renamed Seongpo-Ri at the end of the Choseon period. Fishermen used the area as their forward landing point along the zone running about 300 meters to the southwest and 400 meters to the south of where Star Plaza is currently located. The feng shui (Korean: "poong su") of this spot saw it as the head of a castle, thus it was called Seong Meori (Meaning "Castle Head"] Landing. Later, a boat landing was set up in Sadong Gura after the Korean War. But this blocked the water and prevented boats from coming and going to Seong Meori so the fishermen left for places like Gura (Currently: Sa-Dong) and Baeot (Currently: Bono-Dong) to carry out their livelihoods.

The Seong Meori area became more suitable for farming, and the farming village which sprung up was the home of the Lees of Yeoju, the Shins of Yeongweon and the Yeoms of Paju; it had 76 residences. After the old neighborhood system was abolished in 1976, the area was transformed into what it is today, starting with construction of Artist Apartments, and then [Housing Corporation] Apartment Complex #9 and [Housing Corporation] Complex #10. Right up until the neighbornood system abolition, every year around January 15 on the lunar calendar, a festival was held partway up the slope of Nojeok Hill to wish for the well-being of the village.

As mentioned above, this is Star Plaza: 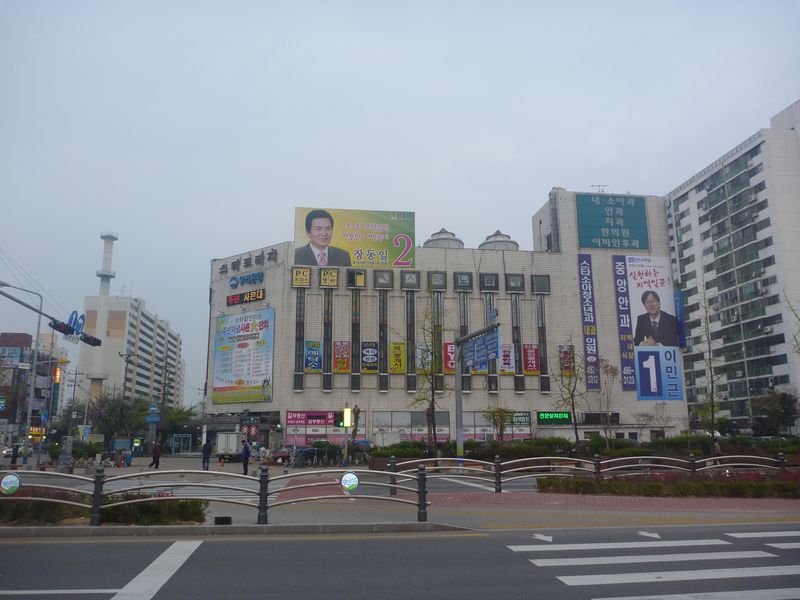 Here's a map of the area. The red lines show the previous waterline around Seong Meori Landing: 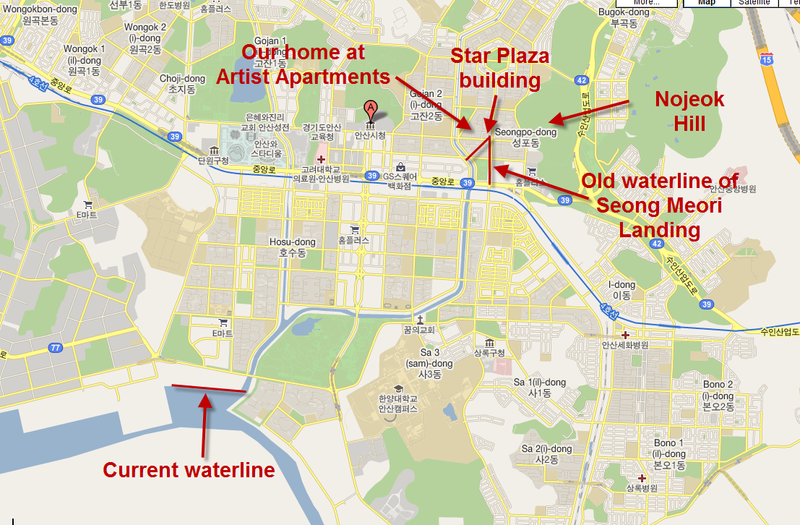