Nojeok Hill, My View from the Top – The Berlin Wall, the Korean War, Foxholes and Korean Unification

Today marks the 20th anniversary of the fall of the Berlin Wall. This event is being celebrated around the world as the symbolic beginning of the end of the Cold War. But to Koreans, the Cold War hasn’t fully ended yet as the separation between the two Koreas at the DMZ (Korea’s “Berlin Wall”) is still (with notable exceptions!) as impenetrable as ever. Indeed, as noted in a previous post (Insight into How Little Anybody Really Knows about North Korea), the news that crosses the border from North to South is most notable for its absence. 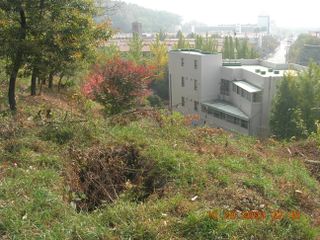 Even in our neighborhood in Ansan, there are small reminders of wartime hostilities in the form of foxholes at Nojeok Hill. Here are two that I know of which are right beside well-travelled paths.

Long before Ansan was built as a new city (see previous post, The New City of Ansan), Nojeok Hill would have been near the sea. Today, of course, the shallow bay has been filled in for development and the ocean coastline is miles away.

I’ve often wondered when and why the foxholes were dug since they’ve been around as long as I’ve been climbing the hill here and never during that time have they served a purpose. It seems possible they originated during the Korean War itself but I’m not aware of any hostilities having taken place in this immediate area. 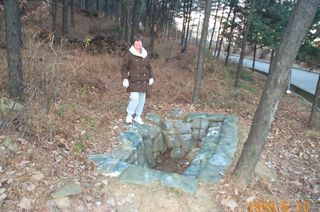 Instead, I suppose they were installed at some point later as a defense against a sea invasion by the North. Since the city of Ansan was developed from the beginning of the ’80s, it seems safe to assume the latest this area could have served as a military line of defense would have been the 1960s and 1970s.

Though obsolete today, these neglected foxholes are a reminder of long conflict on the Korean peninsula.

Getting back to the connection with the Berlin Wall, today is the Korean newspapers’ annual opportunity to discuss the parallels between the unification of East and West Germany and the as-yet unrealized unification of North and South Korea.

The lead editorial in today’s Jungang Ilbo (Korean article: 베를린 장벽 붕괴 20주년의 교훈 [EXPIRED LINK REMOVED: https://article.joins.com/article/article.asp?total_id=3865094]) covers the same information that I’ve ready many times about the possibility of future unification between North and South Korea. Here are the main points of the editorial, which reflect pretty much the standard position of the political class in Korea: 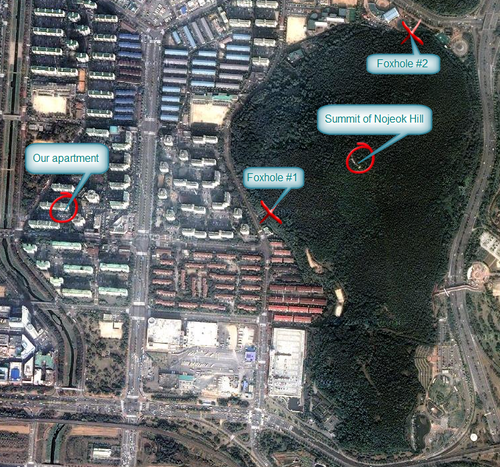