I Force Myself Into Korean-Language Situations

One of my primary goals in studying for a masters degree at Hanyang University in Ansan (see photo below of me in front of the Business Administration Building) is to improve my Korean. This purpose almost comes in at a higher priority than the actual information being taught in the classes or the degree I'm trying to get. It's been an excellent way to push myself out of my comfort zones, though my initial hope that two years of graduate school would put me over the top in terms of Korean fluency reminds me of my original unrealistic two-year horizon for learning Korean in the first place. And indeed, my progress since starting at Hanyang in early 2008 has only been incremental. 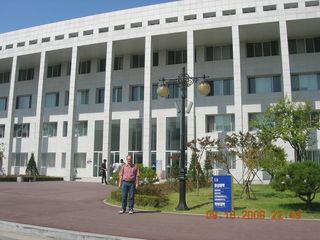 Still, now that my Korean is at a level that I can go head-to-head with most Koreans in terms of their English ability, I generally do not associate anymore with Koreans who won't speak to me in Korean.

It always weighs on my mind a bit, particularly at university when I know that my professors (and other students) who studied at universities in the US or elsewhere would like to speak (and are very capable of speaking) to me in English, but I've learned the following from long experience in Korea:

"A relationship based on a mixture of English and Korean eventually gravitates to exclusive use of one language or the other and communicating at any time the idea that an English-based relationship is possible makes the task of getting back to Korean much more difficult."

As a side note, this Korean-only approach can be an effective way to identify who one's true friends are too; as crude as it sounds to say it, I've experienced many cases where someone was extraordinarily friendly to me but bolted when they found out that I wasn't going to be of help to them in their English.

At any rate, I find it excruciatingly difficult at times to maintain this Korean-only approach, especially as it works against me quite often. For example, I figure that when communicating in Korean, I come across as less intelligent than I (like to think I) am. I frequently struggle to come up with the Korean words needed for a particular situation and that doesn't convey the best impression of my true knowledge or insights on the topic at hand.

In fact, this can be a double-whammy with Koreans who have practiced their English in an academic environment since their English teachers will have "talked down" to them to make communication easier. If someone learns English in this way without a realistic view of how they would perform in the real world, and then meets a foreigner who is struggling to speak in Korean, if the Korean doesn't realize the help they got in their English and/or make the effort to "talk down" to the foreigner in Korean, they may not give the foreigner due credit for his/her actual ability. I think this happens to me from time-to-time, too.

Still, by forcing myself to communicate in Korean, I feel it can only help my Korean skills in the long run.

Outside of class, my Korean study focuses mainly on building fluency and vocabulary. I do this by concentrating explicitly on the four main aspects of language usage (speaking, listening, reading and writing) and by integrating these into my daily life.  In every case, I'm trying to carry out an actual life task or learn something I want to know anyway, at the same time that I do it in Korean. I think this is a key aspect of learning the language past the beginner stage, especially as I find it harder now to commit time to dedicated Korean-language study.

As mentioned above, I generally enforce a "Korean-only" policy with the Koreans I associate with. This can be a little extreme, but it's the way I do it.

There are also a million situations in life (calling the Internet service provider to figure out a connection issue, dealing with the office building manager, etc.) in which it is just easier to ask Myunghee to handle, but on my disciplined days, I handle those myself to stretch my skills in new situations.

Watching Korean TV is a great way to relax AND improve skills in the language. I also feel it helps me learn about Korean culture and history.

It took a long time and was a traumatic experience, but about a year ago, I finally cancelled my subscription to The Economist and I am now getting most of my news from the Korean Jungang Ilbo newspaper. This was one of the best decisions I made in terms of learning Korean and I carry the day's paper with me wherever I go since I love having a portable "package" of timely information available to read whenever I have a little free time.

I've also read the Korean translations of a couple English books I wanted to read anyway; it takes a lot longer this way, but I get the information I wanted to know, as well as the Korean practice, and both are important.

When I come across articles with a lot of difficult vocabulary, I'll often circle the ones I don't know, look up the meanings and write them on the paper and then cut the article out to carry around and study. I often don't follow through in learning these words after looking them up, but if I don't, I just end up wasting time looking the words up again later.

Reading is a chance to go deeper in understanding particular expressions, words and grammatical constructs than I can do when I'm listening to speech where just getting the main idea is often an accomplishment.

For me, writing is the very hardest Korean-language activity to integrate into my daily life. Studying at Hanyang University has been a great help for this as the frequent reports, presentations and tests force me to write. (Again, I enforce a Korean-only policy on my work at the university, even though the professors often remind me that submitting them in English is fine.) I also try to find opportunities to email.

I often wonder what kind of nonsense I'm putting on paper and so I get help from a business associate of mine, as well as Myunghee, from time-to-time, but I generally ask them to help me only to the point that a) my writing communicates what I'm trying to say and b) doesn't insult anyone or look really stupid. I don't ask for stylistic help since at this point, just being completely understood is hard enough.

The advantage in writing is that I have time to think through what I want to say and try to write at a higher level and with expressions and vocabulary that I wouldn't think or dare to use in spontaneous speaking. In fact, speaking is often about just surviving the exchange and this leads to "defensive" speaking approaches; by stretching my abilities while writing, I hope to develop new writing skills which I can transfer to speech later.