Analysis of the Cheonan Incident and the Political Fallout, As Well as Predictions for Its Outcome

I remember where I was when I first heard that the US Space Shuttle Challenger had exploded (in typing class, 11th grade – Lomalinda, Colombia), that the Ceausescu regime had fallen in Romania (backpacking – Cox’s Bazaar, Bangladesh) and about the 9/11 World Trade Center attacks (living room at home – Irving, Texas). In the modern history of Korea, the sinking of the Cheonan naval frigate will go down as a similar seminal moment. And where was I when it happened? In Yoido, Seoul, having beers after the inaugural meeting of the World FTA Forum.

I’m not sure about the Challenger or Romania events, but the 9/11 attacks have generated plenty of conspiracy theories about who really committed the act; likewise, all minds in Korea are not of one accord when it comes to what happened with the Cheonan. (Click here [EXPIRED LINK REMOVED: https://www.rjkoehler.com/2010/06/03/cheonan-conspiracy-theories/] for some of the “alternate” theories.) And as with the US reaction to 9/11, the Korean government has taken a hard-line stand, not willing to let this incident go without a response. Still, the actual options available to the Korean government are surprisingly limited. (Check out this article [EXPIRED LINK REMOVED: https://www.koreatimes.co.kr/www/news/opinon/2010/06/137_66986] in the Korea Times.)

We’ve been discussing the incident over at Korea Business Central (Click here to visit the discussion; note that I was the first member to post an opinion that the North was likely behind the attack.) for the last couple months and it’s interesting to see the comments from members at different points in time since the attack occurred. North Korea expert Marcus Noland was a guest of KBC in the Korea Business Central Series back in this interview in January; he also discussed the situation a week ago in this podcast [EXPIRED LINK REMOVED: https://www.iie.com/publications/interviews/interview.cfm?ResearchID=1583]. 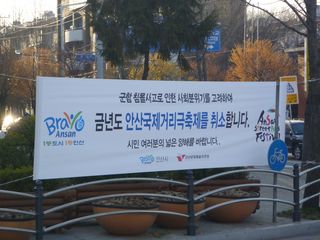 My associate, Don Southerton, has already prepared an overview of the events and some expected outcomes here [EXPIRED LINK REMOVED: https://bridgingculturekorea.blogspot.com/2010/05/so-what-is-going-on-between-north-and]. It’s been all over the news (at least in Korea and internationally; it seems it’s not quite on the front page back home in the US). Here’s some interesting analysis in The Economist, my favorite news source.

The Cheonan sinking has opened up a raging public debate in Korea about what’s to be done; it’s also affected society deeply, such that many public events this spring were cancelled, including one here in Ansan. The banner in the photo above from mid-April says, “Considering the atmosphere in society caused by the naval vessel sinking, this year’s Ansan International Street Arts Festival is cancelled. We ask for the wide understanding of the citizens.” On the other hand, life in the South goes on as before; I can’t think of anything that’s actually changed in our daily routines (except for losing the arts festival, which I suspect the city wanted to cancel anyway).

I should point out that the effects of the incident have roiled the financial markets, leading to a spike in the exchange rate. This worked well for us when we transfered extra funds from the US last week to pay off a big chunk of our Korean apartment loan. Don Southerton has shared here about a silver lining [EXPIRED LINK REMOVED: https://bridgingculturekorea.blogspot.com/2010/05/upside-for-korean-global-business] of the Cheonan incident for the large Korean exporters, too.

The following are my opinions (guesses!) about the situation. It’ll be interesting to come back later and see where I was right and wrong. Note that I accept the Korean government’s position that the attack was perpetrated by North Korea, and not by the US, South Korea or anyone else.

A. The North Attacked the Cheonan To Reshuffle the Deck and Get a New Hand

With the way things were heading geopolitically, Kim Jong-Il just didn’t have much to lose in the attack and sought to shake things up in the following areas.

It is clear that Kim had thought through the next few moves, since the North’s actions and statements following the incident appear to be following a script that is methodically shutting down all channels between the North and South.

By breaking the existing consensus, Kim hopes for new trends to emerge that are more in his favor. What those trends will eventually lead to, we can only wait and guess. But various interesting developments are underway.

B. China’s Just Not That Interested in a Consensus

Based on the standards to which most countries are held, North Korea should have been put in its place long ago. But the implications of agreeing to the dastardliness of the Korean attack on the Cheonan are apparently more unpleasant to China than the embarrassment of looking so out of step with the international community on what happened and what should be done about it.

We are told that Kim Jong-Il, on his recent trip to China, insisted to the Chinese that the North didn’t have anything to do with the Cheonan attack. But if China really does feel betrayed and lied to by the North, China’s certainly not showing this and apparently there’s more to the situation than meets the eye. I have to think the Chinese have some kind of understanding with the North about these types of incidents. In exchange for the North’s role of keeping things unsettled in north-east Asia in ways that the Chinese approve of, China tolerates the pressure from the international community and makes sure the political system stays intact in the North.

It’s hard to make sense of the thought processes there but it likely has something to do with the creeping influence of China in North Korea and China’s possible objective of bringing the North much deeper into it’s sphere of influence, as described in my post here.

C. South Koreans are NOT United in their Condemnation of the North

I was surprised that the Grand National Party of President Lee Myeong-Bak fared so poorly in last week’s local elections, in spite of the praise it is getting internationally for its handling of the crisis. In the elections of 2007, the GNP won an overwhelming victory and interpreted that as a mandate to change the country’s approach in a wide range of areas, including relations with North Korea and other nations.

Apparently that wasn’t the case though; perhaps voters in 2007 were just frustrated with the incompetence, but not ideology, of the previous President Noh Moo-Hyun. Public frustration with the government’s misunderstanding of its original election mandate has lead to a never-ending series of political confrontations by the opposition to try to obstruct the current government’s efforts.

This led to accusations during the campaign by the GNP that the opposition is not adequately patriotic, but obviously, this tried-and-true political strategy is not carrying as much weight as expected.

D. The Cheonan Incident Will Be Gone from the News Very Soon

The Lee Myeong-Bak administration could blame false propaganda for the demonstrations in 2008 against the import of US beef (which was actually about other stuff, in particular, panic by the opposition that the new government seemed unstoppable in its rolling back of the previous ten years of more liberal policies).

But the latest election defeat is clearly a different matter. The government must have thought it had an election winner with its hardline position against the North. Considering that the opposition’s views and political strategies carry more popular weight than the government had heretofore cared to recognize, I expect that the current administration will soften its line on a wide range of issues.

I bet grandstanding over the Cheonan incident will be gone from the news soon, the Sejong city move will take place as originally planned and the Four-Rivers project scaled back and, perhaps, forgotten.

I wouldn’t be surprised though if the government gives ground on the above “public” issues but then redoubles efforts to pursue its agenda in economic and financial sectors, as those appear to be less controversial, but no less near and dear to the heart of the president.

President Lee’s nickname is the “bulldozer”. I expect that the heady days of the Lee Myeong-Bak administration’s “bulldozing” approach to political change are over though; the next few years will involve a lot more middle-of-the-road consensus and less confrontation.

E. Six-Party Talks Will Get Underway Again Next Year Without a Climb Down by the North

The North won’t apologize or admit fault but still the never-ending discussions about nuclear disarmament in the North will get underway again in the context of Six-Party Talks and the old cycle of bribing the North for promises that they only keep half-way will repeat itself yet again.

Considering China’s apparent interests (See Point B above), there doesn’t appear to be any other likely outcome.