The New Chinese Province of Chosun

The Lost Tribe of China

There's a lot of talk in Korea about the way Korean history is being taught in Japan. The two countries don't usually see eye-to-eye about Japanese colonial rule of Korea between 1910 and 1945. Lately, the debate around whether or not Japan had an official presence on the Korean peninsula centuries ago has been in the news. And of course, there's the never-ending dispute about the island of Dokdo, which both countries claim as their own. Fortunately, Korea and Japan are both modern societies that operate under the rule of law. It's hard to imagine these disputes evolving into shooting wars; they'll probably just continue to fester for a long time. 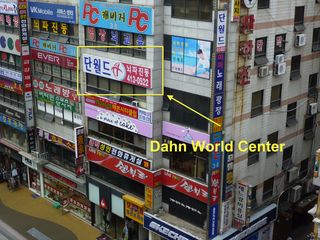 But another historical debate has the potential to blow up into something bigger. I first learned about it while translating in 2006 for Dahn World, a Korean organization with a center right outside my office window here in Ansan (see photo) and whose motto is "Health, Smile and Peace". (Note: Dahn World has been in the US news lately for some less pleasant allegations, too (click here for details), though my purpose today is not to jump into that debate.)

Dahn World's affiliate, Gukhakwon (literal meaning: "Institute for the Study of the Country"), promotes Korean history from a Korean perspective and I translated a number of articles about their work to stop the Chinese distortion of Korean history in regard to the ancient Korean kingdom of Goguryeo. Apparently Chinese "scholars" are asserting that Gogureo was a Chinese clan, not Korean. And since the Gogyuryeo occupied areas of what is today North Korea, the implication is that today's North Koreans are a sort of "Lost Tribe of China".

At the time, I didn't really think much of it. Seemed like interesting reading, but what does it matter from a practical standpoint?

The Fate of Ceausescu?

According to conventional wisdom, the North Korean government faces two apparently bad options: 1) maintain a totalitarian grip and try to avoid social chaos while the economy crumbles or 2) open up to the outside and… unleash social chaos as the people see what a lie they've lived under for so long.

Perhaps Kim Jong-Il and his cronies are running out of time even on the first option. When I saw how the North Korean regime executed one of its own former lead bureaucrats last month, blaming him for the recent currency reform fiasco, it made me wonder just how long the very top of the command structure can avoid the wrath of the people. Apparently there are already riots in North Korea about the worsening economy. How close is the regime to losing control, which would lead to its overthrow and maybe even a bullet to the head of Kim Jong-Il?…. Are we looking at another Romania in 1989?

Surely the end is coming, but how this will happen is a more open-ended question than many people realize.

Marcus Noland's Interview on Korea Business Central Got Me Thinking

South Koreans generally expect that the North Korean economy will fall eventually and that when it does, the North and South will become a unified country again. This assumes that the North doesn't have any other options and that the South simply needs to wait. But what if there is another option? 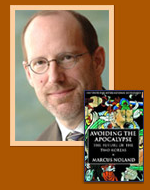 The recent interview on Korea Business Central with Marcus Noland (author of Avoiding the Apocalypse and pictured at left) made me aware of yet another possibility (even likelihood, perhaps!?), which is that North Korea may not "collapse"; it might become a vassal state of China.

If this is what China is working toward, it would explain why China continues to be relatively uncooperative in finding a solution to the North Korean nuclear issue. Further, there is a very large Korean-Chinese community in northern China and China is the closest thing North Korea has to a friend. Even as I write this, Kim Jong-Il is preparing to take the train (he's afraid to fly) to China with outstretched hands to see what goodies the Chinese will give him.

Apparently Noland isn't the only one with this opinion, nor is this opinion limited to outsiders. At lunch yesterday with my advisor at Hanyang University, Professor Seo explained that a lot of Chinese behavior should be interpreted in this context. Further, he asserted that what comes after North Korea goes under Chinese "protection" could lead to war as South Korea seeks to expel the Chinese.

Reunification Achieved… but of China, not Korea

As the North Korean economy crumbles and the government loses control, the North asks for help from "big brother" China, who comes in to restore order. If the Chinese just don't bother to leave after that, who's to tell them to get out? After all, the North Koreans can't run the country on their own and besides, they are really Chinese, descended from Goguryeo of old (but today called "Chosun"). With this outcome, China grabs a little more territory and the former North Korean leaders get to live out the rest of their days under Chinese protection without being held accountable for the atrocities they committed.

In some ways, this would bring the situation full circle… Throughout much of Korean history, Korea paid tribute to China. During the 20th century, the country went under Japanese domination. After 1945, North Korea passed into the Soviet sphere. So, if things turn out as described here, North Korea could find itself under Chinese control as a new "province of Chosun", nominally independent but in many ways like it had been in centuries past.