“New” is the “New Old” in Korea Today

Koreans are reclaiming their history in a big way. When I first arrived in the mid-90s, I remember thinking that if Korea could put together a public relations machine like Japan’s, they would really raise their profile in the world. As Koreans have a lot to be proud of, it’s gratifying to watch this process underway now.

A recent McKinsey report (Available for download at this Korea Business Central discussion: https://www.koreabusinesscentral.com/forum/topics/mckinsey-quarterly-reportsouth) explains that the Korean “national brand” still needs work but I am sure that over the next decade or so, the country will make great strides in promoting itself to the world.

Even so, it is important to remember that promoting one’s history isn’t always the same as remembering and recreating it exactly like it was. The following are four examples of the “New Old” in Korea today.

The Korean traditional liquor makgeolli has been making a comeback in Korea. This cloudy drink, an unrefined rice wine, was traditionally enjoyed by Korean commoners but lately, it’s become very popular in respectable society too and the supermarkets are brimming with it. (Click here for an article about it on Wikipedia. See photo below for the choices at Star Mart here in our neighborhood in Ansan.) 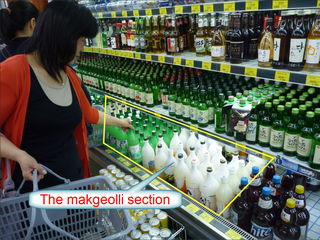 There are makgeolli-related events going on throughout Korea and recently I even got an email from AMCHAM Korea promoting a Makgeolli Experience Tour for foreigners in Korea sponsored by the Korea Trade Investment Promotion Agency. Koreans are all about letting the world know how healthy and tasty Korean food is, and I’m a big supporter of this.

I personally love makgeolli, both for its taste and its low price. Nothing’s better than a couple glasses in the evening while watching the latest Korean TV “historical” drama.

But there’s just one little problem…. Aspartame is listed in the ingredients of every major brand. I don’t want to jump into the controversy here about whether aspartame is a deadly toxin or not, but I think it’s safe to say that promoting aspartame-sweetened makgeolli as a healthy, traditional drink is a bit of misnomer. I guess the stuff the Korean peasants drank in the past really wasn’t as tasty as the new stuff. 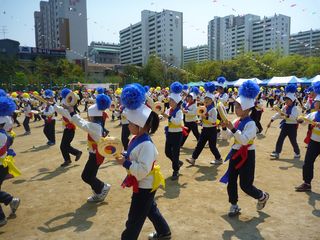 Visitors to Korea are often treated to a musical (and sometimes, dance) performance called samulnori, where musicians dressed in Korean traditional garb sit on the ground with four different kinds of percussion instruments and bang out hypnotic rhythms. It’s amazing the coordination that these drummers achieve and this distinct musical form is getting a great reception from audiences from around the world.

Koreans seems to realize the potential for national branding here and children are learning it in school too. Just last week, at field day at my kids’ school, one of the classes performed a form of samulnori. (See photo at right for the field day event. To learn more about samulnori on Wikipedia, click here.)

But how old is samulnori? Undoubtedly, it derives from older musical forms, but as we know it today, it is… exactly 32 years old, thanks to Kim Duk Soo’s creation of it in 1978. I’m not saying it’s not a great product, but to call it “old” without recognizing the “new” elements would be a mistake. Before 1978, the samulnori of today did not exist.

For an extra special treat, click here [EXPIRED LINK REMOVED:  https://www.youtube.com/watch?v=gh0i82vwqf4&feature=player_embedded] to check out this Nanta video. It mixes elements of samulnori with food… and showmanship… and comedy… It’s definitely worth watching, but is this “traditional” Korea?

As Koreans gain renewed pride in their heritage, it is natural they would want to revive traditional Korean architectural styles. A great way to spend a weekend is to visit one of the many Hanok Villages across the country and stay for a night or two in a traditional hanok house. Bucheon [EXPIRED LINK REMOVED:
https://article.joins.com/article/article.asp?total_id=4146623], a neighborhood in Seoul, has been designated a neighborhood for hanok construction and the government is providing (very!) generous subsidies to get homeowners in the area to remodel in the hanok style. (Click here for information on Wikipedia about hanok.) 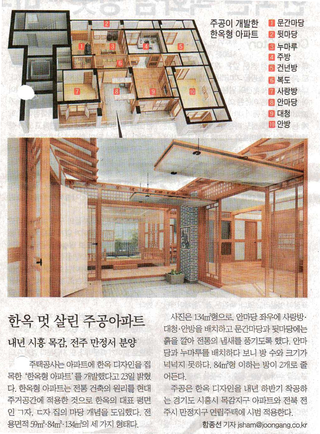 I was very interested last year to see an article in the Jungang Daily newspaper describing the concept one builder has for a high-rise hanok apartment complex. Imagine, living on the 20th floor of a building and feeling like you’re in Korea of yester-year.. I even cut out the article and though I can’t find a link to the original article now, I’ve included a scan of the article on the right.

In today’s atmosphere where “hanok-ization” is becoming a new wave in Korean construction, it’s easy to wonder how much of the “traditional” aspects are really being retained. For example, the Korean traditional “hot stone” concept of actually putting heated stones under the floor (thus “ondolbang” which means “hot stone room”) was long ago replaced in modern homes by pipes sending hot water through the floor.

Many other changes are afoot, too. Just this week, I came across an article from the Jungang Ilbo with a title translated to English as “Government Policy and Standards Support is Needed in Order to Commercialize and Modernize Hanok” [EXPIRED LINK REMOVED: https://pdf.joins.com/index.asp?form_type=article_f&id=DY01201005030127&keyword=%C7%D1%BF%C1%BE%C6%C6%C4%C6%AE&s_startyear=2010&s_startmonth=05&s_startday=03&s_endyear=&s_endmonth=&s_endday=&pagenum=1&s_year=2010&s_month=05&s_day=03&re_keyword=&re_search=&re_keyword2=&re_search2=&s_field=&list_type=2&sv=text].

Again, I’m not saying this is bad, but don’t expect the resulting hanok styles to be “true to the original” either.

Korean family traditions are a mixture of the old and the new. Marriages are probably most representative of this, with at least 50% of the imagery having been copied from Western practice. But some aspects retain a Korean flavor, such as the requirement that female family members at the wedding wear the Korean traditional outfit called hanbok. (Click here for a Wikipedia article.) 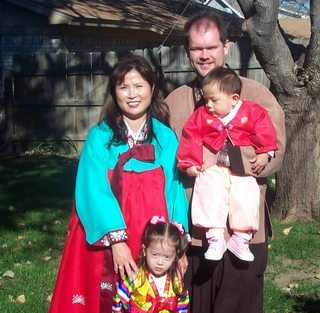 As it turns out, my niece is getting married this Sunday and my wife needs something to wear. Seeing as how hanbok has been around since time immemorial, you would think the hanbok outfit my wife bought about fifteen years ago would still be wearable. But no! It turns out that the styles for this clothing are changing almost as rapidly as for blue jeans and tennis shoes and we’re going to have to rent an outfit for her since I’d hate for Myunghee to look out of style wearing this “traditional” Korean dress. (The photo at left was taken almost 10 years ago on my son’s first birthday… I guess we’d be embarrassed to wear these old clothes around now.)

My point in this article is not to criticize the Korean efforts to modernize traditional goods (though I wish they wouldn’t put aspartame in the makgeolli!), but simply to point out how the word “traditional” is a fluid term in Korea.

Of course, it’s not just Korea; every culture finds it necessary to update as they go along since actually going back in time and really doing things the way they used to be done is something very few of us seem interested in anymore.