Korea’s a small country, but sometimes it feels much larger than it is because of the traffic issues.Things have been getting better — much better! — fast, though.

In fact, the first national highway from Seoul to Busan (approximately the same distance as Dallas to Houston, or NYC to Washington, DC) was only finished about thirty years ago. Now, the country is covered in highways and, especially once you get outside the major cities, travel is fast and comfortable.

Even within the Seoul metropolitan area, the traffic is improving. When I got to Korea in 1994, I remember that just taking the 15 mile trip from Ansan to Suweon was a painful 1-2 hours on the weekend; today, it seldom takes more 20 minutes.

The Seoul subway system boasts something like 300+ stations now, and is growing continuously. It’s been connected to various satellite cities (which mostly means Gyeonggi province) for a long-time but the lines are continuously being extended much deeper into the province. Still, travel times are relatively long. For example, from my office here in Ansan, the subway takes about 40 minutes to reach the outskirts of southern Seoul.

And KTX, the Korean high-speed rail system, is growing rapidly too, with 2nd generation carriage upgrades being introduced in stages, taking riders from one end of the country to the other. (Though, the only boarding point in GyeongGi province is at Gwangmyeong station, which is not convenient to get to from just about anywhere.)

Now, the Korean government is introducing a brand new public transport network that promises to take riders quickly from various points in Gyeonggi province into Seoul and back out again at speeds reaching 200km/hr. It’s called GTX, which stands for “Great Train eXpress”. If it really does begin service on schedule in 2016, our current two-hour trip from Ansan to Euijeongbu will be more than cut in half. Most of the travel time will be spent just getting to Geumjeong station, the nearest junction to us.

I am surprised that there is very little English information on the Net about this. The official site at gtx.go.kr [EXPIRED LINK REMOVED: https://gtx.go.kr/home/index.jsp] doesn’t have an English version. I found an official (Korean) blog called “Mr. GTX” (https://blog.naver.com/whorse54/70070822301[EXPIRED LINK REMOVED: about:blank#blocked]) but the last post was three months ago.

However, I did find this English-language promotional video! It appears to be several videos combined into one, so there’s a lot of repetition, but here it is nevertheless:

In addition, here is a TV report posted yesterday which is about the interfacing of GTX with another rail project in Yongil. Click the photo to view the Korean language video in a separate window. I have provided the English translation of the report below, but the original article is here. 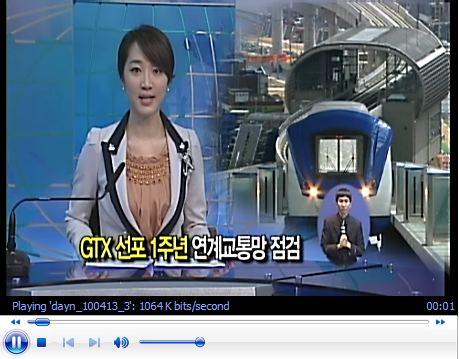 [Anchor] Last April, Gyeonggi Province proposed GTX, a rapid rail transit system for the metropolitan area, as a means of resolving the serious traffic problems in and strengthening competitiveness of the Seoul region. It’s already been one year since the GTX announcement. Let’s take a look at the work going on in Gyeonggi Province to link the transportation networks and achieve efficient GTX construction.

[Reporter] With the opening scheduled for the end of June, trial testing is underway on the Yongin city light rail line.

Running a total of 18.1km from Giheung to Everland, the Yongin light rail line is designed to accomodate up to 226 people in one carriage.

The Yongin light rail line connects with Giheung station on the extended section of the Bundang line, which is currently under construction. Riders will be able to transfer here and it is expected that this will make both Seoul and the Suweon area more accessible.

Gyeonggi province is currently working on GTX, the rapid rail system for the metropolitan area, and is considering a plan to link the Yongin light rail line to the Dongtan-Samseong section of the GTX system, one line of which runs through Yongin.

[Interview] Gyeonggi Province Green Railway Division Head Sang-Gyo Seo says, “We are looking into extending the light rail so that it can connect with GTX.

Exactly one year ago, Gyeonggi province proposed GTX as a revolutionary means of solving traffic problems in the metropolitan area.

Running at 40m underground at speeds up to 200km/hr, GTX was proposed as a revolutionary transportation network that connects all areas of Seoul and Gyeonggi Province within a 30-minute travel time.

To achieve effective operations of GTX, and even as it promotes the early opening of the extended portion of the Bundang line, Gyeonggi Province is actively working to build a traffic network that connects with the light rail line.