Following my designation in February as a Gyeonggi Province FDI Advisor (For more information: Post #1, Post #2, Post #3), I was invited to become an advisor to the Gyeonggi Association of Foreign-Invested Companies[EXPIRED LINK REMOVED: https://www.gafic.co.kr/], too. This organization, based out of Pyeongtaek in south Gyeonggi, is funded by the Gyeonggi Province government, member company dues and fee-based services. Its purpose is to provide support to the foreign-invested companies of Gyeonggi Province and it is an honor for me to serve as an advisor to the Association.

Here is a copy of the Letter of Commission which I was awarded at the directors’ meeting: 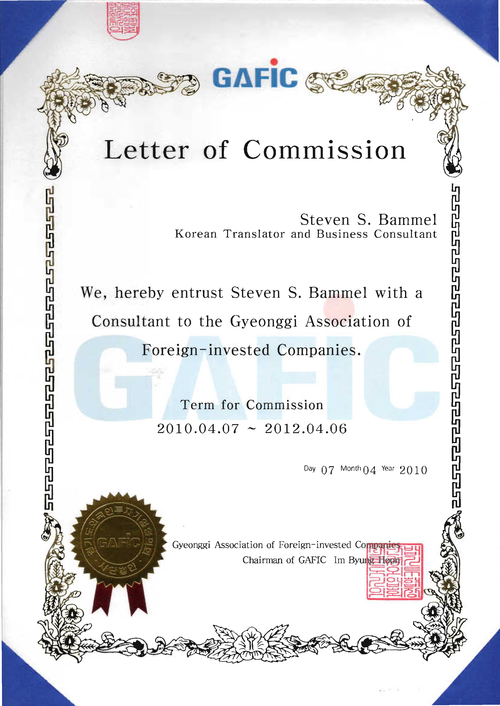 The directors’ meeting was held at the Ramada Plaza Hotel in Suweon but I had travelled down to Pyeongtaek a couple weeks before on March 24 in order to meet Secretary General Jake Kim at the GAFIC office to find out directly from him about the work of the Association. Here are some of the notable facts I learned in my meeting with him.

The Directors’ meeting which I attended on April 7 was actually three meetings in a row. I had not realized this in advance, but I learned a lot of helpful information about business in Gyeonggi Province by sitting through the entire four-hour event.

Secretary General Kim and the GAFIC team are ready to help. If you want information about GAFIC, you can reach the team through the GAFIC website. Or if you wish to do things in a bit more Korean way, contact me and I would be glad to introduce you directly.