The advisor meeting on Friday, February 19, 2010 was held at the Ramada Plaza Hotel in Suweon. As this was my first time to hold an official title in Korea and I didn’t have any idea what to expect in advance, I was apprehensive before the meeting. In particular, I had volunteered to give a presentation even though it was my first time to have attended.

The advisory committee meets twice per year and is made up of a cross-section of the Korean business world, each specializing in a particular subject matter. There are four advisors with expertise in the large Korean conglomerates, six focused on strategic global regions (two for the US), two from think tanks, six in miscellaneous areas (finance, accounting, law, services, FDI and PR (that’s me)) and four from academia. No advisors, as far as I know, are paid for their support and so each of us was in attendance as volunteers. Several government officials from the Foreign Investment Attraction Office were there, too. 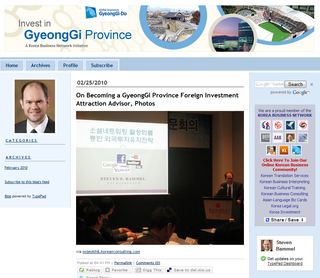 I was very impressed at the calibre of people in attendance. Though the meeting was held in Korean exclusively (except for the Japanese head of JETRO in Korea, who participated through an interpreter), I doubt many advisors would not be easily conversant in English; many have studied and worked overseas. I recall that the Director General has a Ph.D. from an American university and worked for something like 10 years in the research department of a US multinational corporation.

There are apparently 2-3 other Americans, but they were each represented by a Korean representative at the meeting so I didn’t meet them. I was the only Westerner there and every advisor is male.

I spent the meeting mostly listening. And coming from a US perspective, it was interesting to note that foreign investment in Gyeonggi Province doesn’t only mean American or European investment. In fact, a great deal of the group discussion was taken up by the topic of attracting FDI by Japanese companies. In particular, with the recent Toyota quality issues, which is apparently top-of-mind in Korean business today, advisors were asking what kind of value proposition GyeongGi Province could offer Japanese companies so that they can escape the high costs of Japan while still maintaining quality. The conclusion was that while Korea is not a cheap country anymore, the cost/quality ratio is competitive.

I noted also how the pitch being given by GyeongGi Province when it courts the CEOs of multinational companies is that, rather than trying to sell in the Korean market directly, they should simply use Korea as a production location for re-exporting elsewhere. This is interesting to me on various levels because it almost came across to me as an acknowledgement that the Korean market is too small and/or too difficult to crack and that foreign companies shouldn’t bother themselves with trying to export into it.

I think this overlooks a very important competitive point about the Korean market, which is that it is probably one of the best test-beds for foreign companies before or during their entry into other Asian markets (i.e. China) and that Korean offices of MNCs punch above their weight in terms of introducing innovations that are then applicable globally. I cut an article out of the Korean version of the Jungang Daily back on November 19, 2008 (“다국적기업, 한국서 배운 ‘성공 노하우’ 들고 세계로 간다” [EXPIRED LINK REMOVED:  https://article.joins.com/article/article.asp?total_id=3384458]) which describes this in detail.

This is a profound advantage that Korea offers and I may suggest giving a presentation at the next advisor’s meeting in August about this very topic. I don’t remember anyone at the meeting mentioning this and I bet such a Korean advantage may not be adequately recognized in the efforts of the province to attract FDI. By being able to emphasize the creativity of its people and dynamism of the market helps the province move beyond the quality/cost dimension and truly give substance to the catchy slogans that every city and province in Korea keeps coming up with.

Overall, the meeting was a fascinating opportunity for me to experience Korean business from the inside and continue building my network.