What a Come-from-Behind Win Means to Koreans

I came across a remarkable piece in the Jungang Daily newspaper yesterday. I say it’s remarkable because within just a small print space, the article provides a unique glimpse into the Korean mindset of today and illustrates factors from the past that have contributed to this outlook.

Though the main news stories in the leading Korean media are translated over to their English editions, many gems are left out and remain inaccessible to non-Korean speakers. This is unfortunate, because a deeper understanding of Korea today cannot be achieved without grasping the nuances in tidbits like this.

The article was written by Park Tae-gyoon, Professor of Modern Korean History at the International Graduate School of Seoul National University and the original Korean version can be found here [EXPIRED LINK REMOVED: https://article.joins.com/article/article.asp?total_id=3895261]. Here is my translation of it. 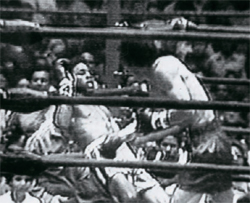 In Panama on November 27, 1977, Hong Soo-hwan was crowned champion in the newly established junior featherweight division. When he first won a championship in 1974 in South Africa, Hong had called his mother to tell her about it and is reported to have said, “Mom, I beat the champion”, to which his mother replied, “Yes, my son. Long live Korea!”. In fact, this short conversion even entered the Korean vernacular of the time. Hong’s fight in Panama also resulted in a well-known story. In the second round of that fight, he was knocked down four times but came out right at the beginning of the third round to win with a dramatic KO.

Even though many events have transpired throughout the modern history of Korean sports, Hong Soo-hwan’s win in 1977 stands out as one of the most memorable. What could be the reason for that? More than anything, the answer to this question is found in the fact that we Koreans are drawn to the idea of a come-from-behind win. Having lost our country’s independence to the Japanese at the very beginning of the 20th century, Korea then emerged from the Japanese colonial period only to be split in two and then suffer through the Korean War. During those long years, could we have wanted anything more ardently than a “come from behind win”?

Of course, athletes such as Sohn Gi-jeong and Yang Jeong-mo earned gold medals in the Olympics in 1936 and 1976, respectively. But it is the comeback wins in wrestling by Kim Il, in boxing by Hong Soo-hwan and in baseball by the Kunsan Commercial High School in the 1970s that Koreans remember with the most pride. These winners gave victories not just to the nation as a whole, but also to each of us individually. Hong Soo-hwan’s win took place alongside the national achievements in 1977 of reaching $100 million in exports and per capita income of $1,000, and coincided with the re-emergence of “makkoli” made with natively grown rice.

Another reason Hong Hwan-soo’s win stands out so clearly today is that it represented a happy moment in what was otherwise a very difficult time in the country. In 1977, the darkness of the Yushin Constitution was pressing down on society. Furthermore, not only had Korea been on the losing side in the Vietnam War but the oil shock of 1974 caused enduring economic shadows. As a result of the severe emergency measures taken by the government in response to the outbreak of student demonstrations about a month before, there was a 20-day suspension of university classes and no one at the time could predict when things would get better. In addition, the fresh memory of the Iri Station dynamite explosion incident that occurred on November 11 of the same year led to a generally gloomy feeling throughout Korean society. It was within this context that the victory of Hong Soo-hwan provided such an inspiration to the entire nation.

Sports generate various effects like this in society. In particular, they serve as a means of bringing a nation together through the shared experience of sporting events that take place at the national level. This is one reason most autocrats have pressed for the development of national sports programs. But in addition, the more sporting develops, the more the genuineness and variety are lost as commercialization creeps in. Here, we might even mention the cruelty that sports often involves. Thus, even if we say that such achievements are sought for the sake of the “country”, we still miss the naive beauty of the sports of that bygone era.