Nojeok Hill, My View from the Top – On the Campaign Trail

Myunghee and I arrived at Nojeok Hill around 6am this morning and started our walk along the perimeter trail in the dark. About a hundred yards down, we came across Candidate #7, Kim Seok-Gyoon, handing out campaign cards under a park lamp. As luck would have it, I had brought my camera and asked Candidate Kim’s assistant to snap the memory. 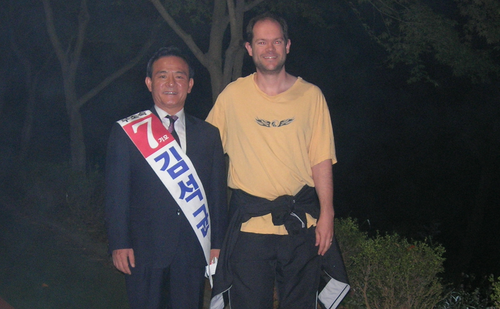 Tomorrow is special-election day in our district, Sangrok-Gu, to fill the position held by someone else until he was impeached for corruption. Every candidate gets a number, with the lowest numbers going to candidates from the largest parties. So that means my pal, Candidate #7, is hardly the leading contender for the position. 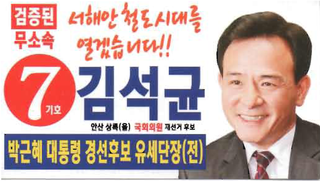 Sure enough, his campaign card shows him as “unaffiliated”, though it is clear he is aligned with a dissenting faction of the Grand National Party (GNP) [EXPIRED LINK REMOVED: https://www.hannara.or.kr/], which is the party of President Lee Myung-bak and which currently holds power in the Korean National Assembly. Candidate #7’s faction is that of Park Geun-Hee, who is the daughter of former President Park Jung-Hee (see yesterday’s post) and who was beaten by President Lee to lead the GNP in the presidential primaries a couple years ago. The bad feelings from that political battle still dog the government party. 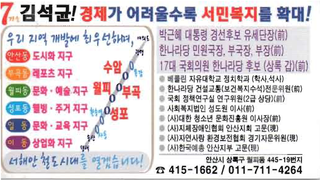 From the back of the card, we can see the issues that are important in our area. First of course, is the question of who will best protect the disadvantaged in the current economic recession. But second is the decision of where the new Ansan subway line will be built. Candidate Kim assures us that as assemblyman, he will make sure the new line goes through our neighborhood and not the area a few miles to the west. The final decision is set for December, so there’s a lot of lobbying going on. The residents of whichever neighborhood the subway line goes through can look forward to a big property value boost.

Korean elections in the city are notable by how easy it is to meet and greet the candidates. Because of the close proximity within which everyone lives, just a casual stroll through the neighborhood can generally produce a candidate’s campaign truck roaming around with speakers blaring (see video below) or an actual candidate (as evidenced by our meeting in the dark this morning). And when campaign workers line up on street corners and bow to the passing cars, they make no distinction between voting Korean and non-voting foreigner. I always get a kick out of being bowed to as I drive around during election season. 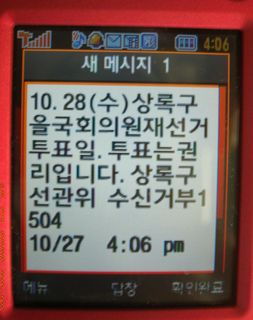 Finally, just as I was finishing up this post, I received the following text message on my phone. It says: “October 28 (Wednesday) is election day for the national assembly member representing Sangrok-Gu. Voting is your right. Sangrok-Gu Election Committee”. I would have expected it to also mention something about not accepting money from politicians in exchange for a vote but perhaps the days of that kind of blatant corruption have passed.

National election day in Korea is always a public holiday; unfortunately, because these special elections are being held in just certain areas, we don’t get that benefit tomorrow. If we did, I could miss my Strategic Economics class at university…