Park Jung-Hee had been in power in Korea a little over two years at the time of JFK's assassination in 1963. Sixteen years later on this day, October 26, 1979, Park was also shot dead while still president. Today, not unlike the way Americans remember Kennedy, many Koreans look back on the rule of Park with nostalgia and virtually everyone regards his rule and death as pivotal events in the modern history of the nation. At his funeral, hundreds of thousands of Koreans lined the streets of Seoul to mourn. 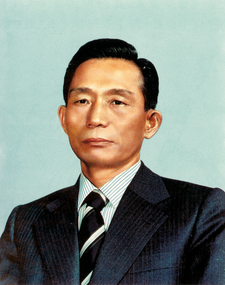 But Park was no respecter of human rights in the tradition of Kennedy and he didn't reach office through the ballot box. Instead, he was a military man who took power through a coup e'tat, ousting the elected president Syngman Rhee, with whose chaotic rule many had become tired. This event ushered in eighteen years of right-wing dictatorship — and closer ties with the United Stated. In these and many other ways, Park's rule was nothing like that of Kennedy's term of office; it was most similar to that of 20th century autocrat, Augusto Pinochet of Chile.

But today, if you ask the average Korean who Park Jung-Hee represents to them, many, if not most, will say he is the father of the modern Korean nation, that he carried Korea through a necessary phase of economic development and that he paved the way to the advanced society Korea is today. At the same time, Park's rule was harsh and few in Korea would welcome back anything like it again. Opinions about his death at the hand of the director of the Korea CIA (some Americans would see another possible parallel with Kennedy here!) tend toward a belief that his rule was destined from the beginning to end in tragedy.

Today's articles in the Korean newspapers looking back on his life and death reflect this dual memory Koreans carry with them of President Park Jung-Hee: sincere appreciation for what he did for the country, but a refusal to say much good about him without following up by reminding the reader of the excesses of his rule. It's almost as if his achievements need an apology; that he was the exception to some rule that says success can't come from doing things the wrong way.

I often wonder why later Korean presidents have suffered so much in the opinion polls after they take office. It happens every time. Perhaps it's due to the memories Koreans have of Park as someone who ruled with an iron fist for nearly two decades without any apparent personal financial corruption and who got things done and moved the country forward relentlessly. It may be a different world now, but Koreans long for another leader who delivers everything they remember about President Park — but who does it nicely.