President Park just declared Ansan a disaster zone in order to make the city eligible for various federal assistance. I’m sure the mood is amplified for me because I’m so close to ground zero in terms of the school that the missing kids attended, but it feels in Korea just like it did after 9/11 in the US.
The government’s cancelled all public festivals (yeah, no Street Arts or Tulip festivals in Ansan this year), election campaigning is forbidden and the news keeps talking about the national trauma that’s being suffered by the citizenry (not to mention the relatives of the missing, or of the missing themselves, or their friends who were rescued and are now wracked with guilt). Commentators on the left and right are going on and on about the rotten core of Korean society. 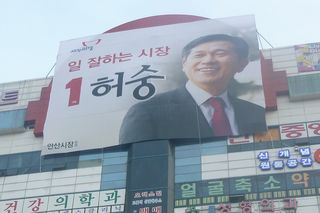 The ban on electioneering has at least gotten one Ansan politician I know to shut up a bit after having posted multiple SNS and text messages last Wednesday on how horrible he felt about what happened and how he was heading straight down to the accident site. I’m not sure why, especially since he’s not an office-holder; not even a candidate. He’s a “preliminary candidate” for mayor. His sign says he’ll be a mayor who is good at working; apparently he can’t work quietly though. According to the news, they’ve finally chased out these scumbags from Jindo who were posing for photos and sharing in the free food brought in by real volunteers for the relatives of the missing. Way to go, Mr. Soong Huh!
Meanwhile, the government keeps throwing hundreds of rescuers, divers and ships into the mix and then talking about how hard it is to get into the sunken vessel. So here we are, five days into it, and they still can’t find 80% of the kids even though they know exactly where they are.
I’ve got a detective friend here in Ansan who investigates deaths in the district where the school’s located. He’s gone off the grid and is surely down there at Jindo IDing bodies. He told me that after 20 years of this, he doesn’t get any emotional feelings from his work anymore, but I bet this time is different.
Cauvery went to his first funeral a couple nights ago. He and Treasure don’t seem too affected by the disaster, but who really knows, right? They have other friends with missing older brothers and sisters too so there should be more funerals in the schedule soon. As an aside, Treasure tells me the teachers at school are having an easier time than usual keeping the classes under control.
Lots of people I know are letting me know know they’re praying for the situation. One competent dive team on the first day would have been worth more than all the prayer in the world though. Why does nobody ever point out the obvious and/or hold the pious accountable for the ridiculous claims they make about the power of speaking to the ether? To post this kind of opinion on my Facebook discussion where all the prayer comments have been posted would be considered insensitive and offensive. Thus, I’m hiding this over here on my blog that few of them are likely to read (if you did use the “p” word and then make it this far, sorry…) It seems at least as insulting to the deceased to bring up something as glib as prayer at a time as serious as this. This irritates me, big time, especially on Easter… you know, the day of resurrection and other superhero stories like that.
For those who are curious, here’s the address of the school: 426 Gojan-dong Danwon-gu, Ansan-si, Gyeonggi-do. (And here’s the website: https://danwon.hs.kr/.)
I’m told that the authorities have closed off Danwon High School to anyone but students; I guess so many well-wishers from around the country were coming to express their condolences and lay flowers that it just became too much. The focus for related events in Ansan seems to have moved to Hwarang park, which is quite near Danwon High, and there’s tons of room there, so it’s a suitable place. As far as I know, evening candlelight vigils are being held there, starting around 8pm each day.
For those wishing to visit, here’s a map. The closest subway stop to the park is Choji station. 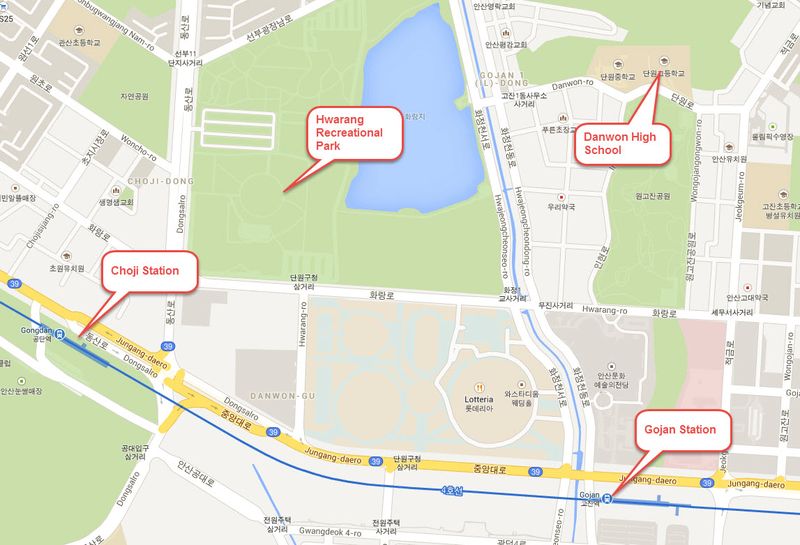 Myunghee reports that business at Only Coffee is way down since the sinking.