Book Review: Dominion from Sea to Sea by Bruce Cumings 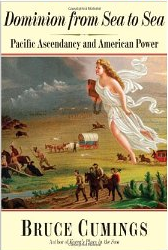 I enjoyed Dominion from Sea to Sea [EXPIRED LINK REMOVED: https://www.amazon.com/gp/product/B003BNZJ0E/ref=as_li_ss_tl?ie=UTF8&camp=1789&creative=390957&creativeASIN=B003BNZJ0E&linkCode=as2&tag=korcontraseri-20] , though I would have liked to find more specifically Asia/Korea historical content. This is just a personal preference though and knowing US history interpreted through a Pacific lens is good.
I can’t say my reading level is as advanced as Cumings’ writing skills in parts. He’s the master of the literature review, and my eyes glazed over in sections like the intro and appendix as he discussed Schumpeter, Marx (two thinkers I’ve heard of) and others (many who I haven’t heard of).
My favorite parts were the sequential presentations of history, and especially when explaining about the movement of people over time. I was a bit surprised how nasty and cynical Cumings got attacking the major actors of Silicon Valley. It was fun to read though, and Seattle’s now tops on my list of places I’d like to move to in the US (if I can get out of Texas; hate that place, but it’s where the roots are…)
There was one thing in the book that really did stand out as a question mark. Cumings writes with such skill most of the time about complicated concepts, that I take it as policy to respect his intellect and not ask too many questions or advocate alternative opinions. (He’d be a scary person to disagree with in person!)
However, when he got to one section that I know a bit about, I rather felt he got petty. While recounting his visit to US military bases in Korea, he didn’t sound any more profound than the average expat two weeks into his Korea experience. At one point, he referred to the “sad state of Korean-American relations”, and I couldn’t figure out where that came from, as well as “In the camp towns around American basis in Korea the atmosphere is often malevolent, with an air of resentment and cold stares”. Cold stares? Well, Koreans don’t generally smile at strangers anyway…. but no. And it was certainly not in context with the rest of the paragraph. So it did make me wonder if Cumings is just a bit too dramatic thoughout, even on the parts I can’t speak about with confidence.
Anyway, I generally feel embarrassed about my own writing after reading Cumings. He must have a photographic memory with perfect recall; I can’t imagine how he puts so much solid information into such a compact space, and then wraps in such masterfully crafted prose.
I probably won’t read this one a second time but it now joins my collection on the bookshelf of valuable literature for future reference back.