I discovered something really strange after writing the first section below, so, to keep the order of my thought process in sequence, I present this article in two parts.

Some time ago, I was flipping through my wife's phone and came across a translation error in the Google Android interface. Recently, I got my own brand new Android phone, and, almost as if to commemorate the occasion, I quicky found another mistake! It's on the following screen that explains how to use the phone's camera. 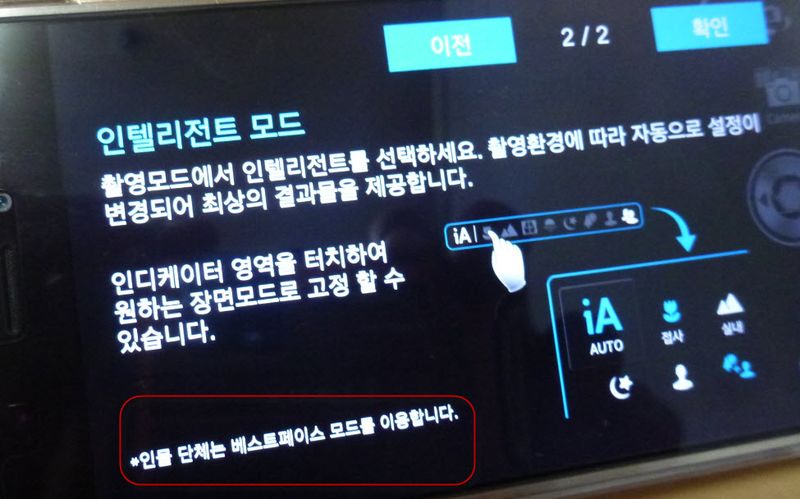 The translator relied on a word-by-word approach to get through this sentence. In fact, the translation is so literal that it's easy to know what the original English said. The following is either exactly what the English said or a close approximation: "Use Best Face mode for [taking photos of] groups of people."

First, I'll point out that "Best Face" is translated to Korean as a transliteration of the English into Korean letters, not a translation of the meaning of "Best Face". This is not wrong and can be an acceptable approach. Here, it's a good way to handle the translation and I'm not objecting to this part.

This mistranslation is rather hard to explain in English but the problem is in the translation of the word "people". The phrase "인물 사진" refers to photos of people, literally "human photo". But that doesn't mean you can just switch out a Korean word for group (단체) for the Korean word for photo (사진) to get "인물 단체" (human group).

It doesn't work because 인물 has certain connotations that work in some situations where we'd use the word "people" or "humans" but not in others. We can actually get the idea in English by considering the phrase "Use Best Face mode for [taking photos] of groups of humans". Well, it makes sense, but it's a little awkward, isn't it?

One more thing… Though not strictly wrong, since it is possible to use the declarative sentence form in such a case in Korean, my colleague DH Kim, who gave me feedback on this, suggests that the use of the imperative form communicates better. That's why the alternative translations in the paragraph above end in 하십시오 rather than 합니다. He also noted that the other Korean text in the photo above is not particularly well-written either. In other words, we could have done better…

After writing the above and before publishing the post, I decided to switch the GUI language on my phone to verify what the English says on this screen. Here it is: 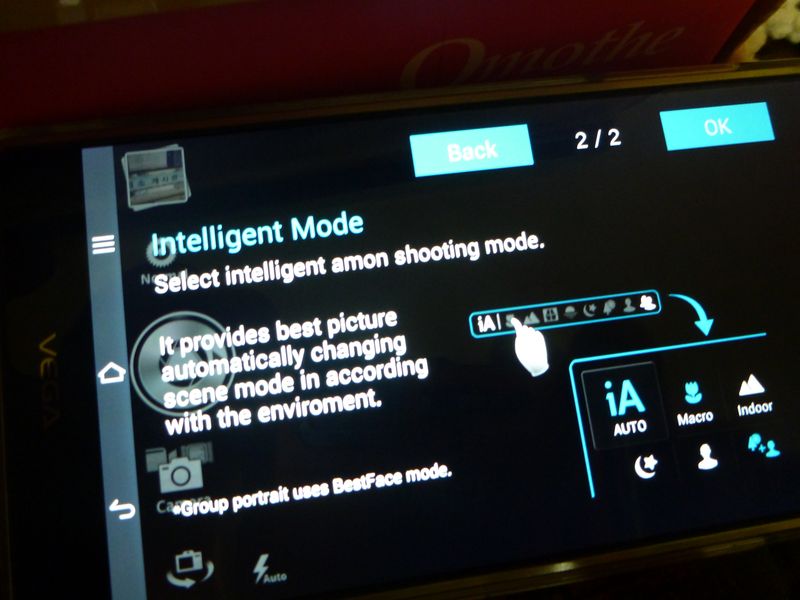 Check out the English… "It provides best picture automatically changing scene mode in according with the environment."?… Whoah…  This looks like pretty typical Konglish, which means it would have been written by a Korean who is a non-native English speaker. This kind of writing is a common result of Korean companies trying to save money when translating into English. But if this is the case, then it means the Korean which I objected to in Part 1 would have to be the source… That can't be because a Korean wouldn't have written the expression I pointed out.

So, I don't know exactly what's going on. But I'm guessing that this isn't the core Google Android interface text. My phone is a Vega, which was manufactured by the Korean company Pantech. Perhaps the camera component though came from somewhere else, say a supplier in Taiwan or China, and maybe the supplier provided the documentation in both English and Korean, based on a Chinese source text… And of course, the supplier produced bad translations in both languages… which were then plugged into the phone's GUI to seemlessly become a part of the Google Android interface for this phone model…

Also, it's interesting that the English in dispute in Part 1 above is actually "group portrait", not "group of people". That doesn't change the validity of my criticism of the incorrect Korean expression but the differences do seem to indicate a common source for both the Korean and English, and that the Korean wasn't translated from the English… and that both languages were translated badly.

Korean Translation Tip - To avoid translation disasters like this, work with competent translators and don't leave out the budget for proper proofreading and QA either.