Koreans are commonly concerned about how non-Koreans view their country, and one index for measuring this is the number of foreigners living in Korea.

According to an article in the Jungang Ilbo today (“Foreign Talent Leaving Korea Due to “Three Serious Difficulties”), the number of foreigners living in Korea is about 1.22 million. However, of these, only about 40,000 are classified as “professionals”; the others would mainly be laborers, students and immigrant wives.Furthermore, of the professionals, about 20,000 are in the English-teaching profession, meaning that there are about 20,000 non-Koreans working in Korea in professional jobs that are not related to ESL.

The chart below shows that the number of foreigners in Korea has more than doubled since 2005, but that the increase is slowing significantly.

The article points out that the number of foreign professionals actually declined over the last year and in a survey, three main complaints foreigners have about Korea are listed in more detail in one of the sub-articles (“Schools for Foreigners Are Too Expensive… He Sent the Family Away and is Living as a ‘Goose’ Father” [EXPIRED LINK REMOVED: https://find.joins.com/Search_Link.asp?Total_ID=4494238&query=%BF%DC%B1%B9%C0%CE%C7%D0%B1%B3] – “Goose Father” is the term Koreans normally use to refer to a Korean father who works in Korea to pay for his wife and children to live overseas for a year or two so that the children can get a foreign education.) 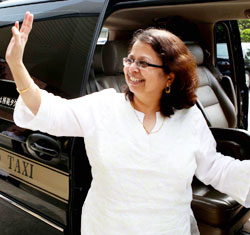 Finally, in a third article entitled “English Isn’t Easy in Lectures or in Everyday Life… Goodbye, Korea” [EXPIRED LINK REMOVED: https://find.joins.com/Search_Link.asp?Total_ID=4494244&query=%B0%AD%C0%C7%B5%B5%20%BB%FD%C8%B0%B5%B5], there is the story of an Indian professor, M. Desai (photo at left), who had signed a six-year contract to work at Seoul National University but ended up leaving Korea after only nine months, complaining mostly of the difficulties of working in an environment where English is not spoken fluently. This really surprises me because Seoul National University is one of the top schools in Korea!

These types of stories keep showing up in the Korean news and many Koreans are earnestly looking forward to the day that non-Koreans come to Korea and find it to be as international and liveable as any other globalized place in the world. It seems Korea still has a long way to go.