Overcome with Emotion From Singing the Hymn to Kim-Il Sung 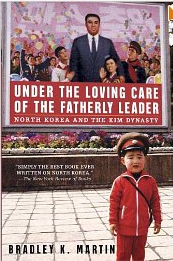 I'm reading Under the Loving Care of the Father Leader: North Korea and the Kim Dynasty, by Bradley K. Martin.

Here's an account of the composition and first singing of the hymn to Kim Il-sung on his 60th birthday, as told and interpreted for Kim Jong-il's official biographers.

Apparently Kim Jong-il was in charge of arranging the birthday party for his Dad and as part of that, he commissioned lyricists and composers to spent fifteen months writing a song.

"Many songs were written but none of them appealed to Kim Jong-il."

"With the deadline approaching, Kim Jong-il visited the composers late at night…. Despite all those sacrifices by the Great Leader, '[the composers] had not yet produced a single song that would pray for [Kim Il-sung's] long life.' Kim Jong-il continued:"

"… This song must not be a mere ballad; it should be a hymn of the entire people expressing their ardent hopes and wishes."

"[At the banquet], the performers stood to sing… but they could not, they were sobbing so hard."

"Both the conductor and the orchestra were similarly affected and everyone at the banquet gave way to tears. Dear Comrade Kim Jong-il… called in several other singers.. but the voices of these singers also faltered and the audience, who were standing up, began to join them, singing between their sobs. The whole house plunged into a whirlwind of excitement…. The sound of weeping could be heard everywhere."

Wow! I think I'd like to get a recording of that hymn…