The following is an extreme example; I don’t usually get corralled into conversations like this in Korea anymore, though, for obvious reasons, it used to happen a lot more often when I taught English.

Fortunately for me now, my ace-in-the-hole is that I can converse in Korean. Without that, this would have been an English discussion where I couldn’t have stopped the chat cold by insisting on Korean.

Also, I would have had to come up with some nonsense excuse to turn down an invitation to dinner or out for drinks. Or, I could have been really brazen and said, “Sure, I’ll be glad to have dinner with you. My English tutoring rates are W40,000/hour so be sure to bring about W100,000 to cover dinner and conversation!”

As it is, I think it’s pretty safe to say I won’t be hearing from this guy again and so I don’t have to spend extra brain capacity trying to weasel my way out of an unpleasant get-together.

The mindset described here follows people from English-speaking countries around as we live and work in Korea. I understand the reason for it but it also serves as a perfect excuse for foreigners in Korea to not have time to study Korean and miss opportunities to speak it. I think it also leads to a lot of shallow relationships, which likely contributes to the disillusionment many foreigners end up experiencing in Korea, as well as misunderstandings some Koreans have about foreigners.

Those of us who have learned Korean to any degree and formed real relationships have often done so by sticking to our guns in day-to-day life. 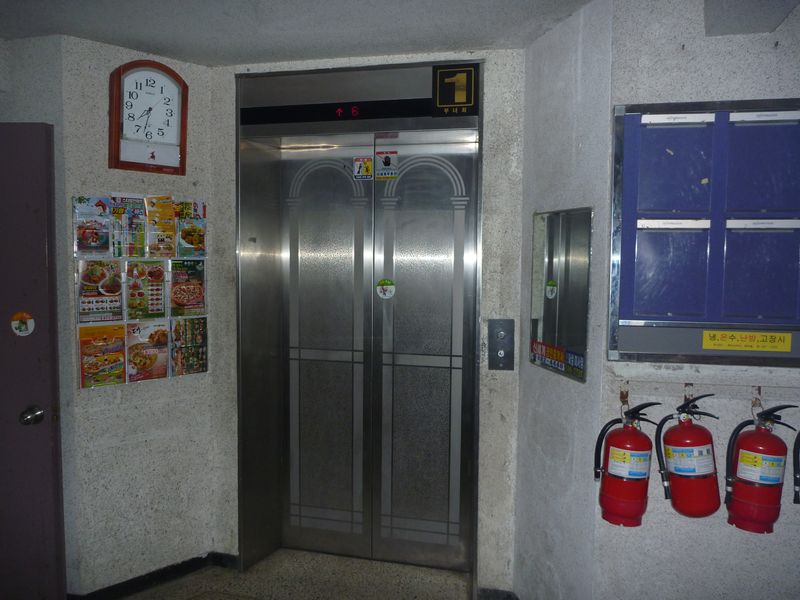 So I’m heading home from work yesterday and as I’m waiting on the ground floor for the elevator in our apartment building at the spot in the photo here, a guy walks up to me and says, “Hello”. Those were the only words of English spoken (thanks to my stubborness); the rest was in Korean and here’s a paraphrased translation of what we said.

Him: You live here, right?

Him: Have you lived here long?

Me: About four years.

Him: Oh! I live right here on the first floor, in that apartment over there.

Me: It’s very nice to meet you.

Him: Yes. I’ve seen you walking by many times but I didn’t have the chance to greet you. Where are you from?

Him: Where do you work?

Him: Are you an English teacher or something?

Me: No, I have my own business.

Me: Thanks. Here’s mine. Oh! I see you’re a professor at Hanyang University. Did you know that I’m also a masters student over there.

Him: I’d really to learn English from you.

[Note that he didn’t give a hoot about my connection to his university. In fact, in the actual conversation, I think I remember trying to mention my Hanyang University connection again since I thought he must not have heard me the first time. Turns out he wasn’t listening the second time either.]

Him: Really? Why not?

Me: Well, I have my own business doing other things.

Him: Well, couldn’t you help me learn English?

Me: I have a rule that I don’t speak English to Koreans anymore.

Me: I’ve worked hard to learn Korean and I live in Korea. So I am very stubborn about only speaking Korean with Koreans in Korea.

Him: But couldn’t you speak English with me? I really need to learn. It would be just as if we’re friends. Besides, we live in the same building together.

Me: Yes, thank you. But no, I wouldn’t be willing to do that.

Him: Hmm…. You really wouldn’t? We’d be just life friends.

Me: Yeah, Koreans approach me for this kind of thing quite often; you’re not the first, believe me! But as I’ve thought about it, when people just want to be my friend so they can speak English with me, I feel used. I realize they aren’t real friends. That’s why I have this rule that I follow about not speaking English.

Him: How old are you?

Him: So, we could get together and just be drinking buddies.

Me: Sure, but I’m not going to speak English with you.

Him: You can’t speak English just to me? I need to improve my English before I go overseas for travel.

Me: Well, there are lots of English professors over at Hanyang University. You could learn from one of them.

Him: No, that won’t work. If someone at my level is seen to be studying English, it would really reflect badly on me.

Me: OK, then how about going to an English institute?

Him: Nope. Word would get around.

Me: Fine, then you could go study at an English institute in another city in the area.

Him: [laughs] You really won’t help me with my English?

Him: [Facial expression of trying to think of something to say to extend the conversation]

Me: It’s been nice to meet you. I need to get going; my son’s waiting for me at home.