I Started Learning Korean This Way (Part 3 of 5)

I Got a Tutor

Secondly, if you go out and teach English for money, you can charge about 3-5 times what you would have to pay a Korean to teach you Korean. To alleviate this imbalance, I remember trying to trade two hours of Korean for one hour of English but that left me feeling pretty guilty at my chutzpah for such an “uneven” trade.

So at first I paid cash to Korean teachers at my ESL institute for lessons and this was helpful for getting English-language explanations of grammar and vocabulary (especially at the beginning), but I wasn’t forced to think in Korean AND, as English teachers, their time was worth more than I was willing to pay. So relatively soon into my Korean-study program, I moved to four-hours per week of one-on-one Korean lessons with a college student at W10,000/hour (later W15,000/hour).

I would study on my own during the week and prepare questions and practice exercises for my weekend tutoring. When my Korean teacher showed up, I did not expect her to come with a lesson plan; I would simply go through my notes asking questions and asking her to do the practice problems with me. It was intense, hard work, but about a year and a half of this was enough to get through a lot of material.

Organized Korean Classes Weren’t for Me

There are a number of universities in Korea offering good Korean language programs; but being out in Ansan and working an ever-changing schedule at my foreign-language institute, it was not an option for me to travel into Seoul to attend Korean classes.

Later, when I worked at LG International in Yoido, I did take a one-semester evening class in 1997 at Ehwa Woman’s University. But by the time I got home after 11pm each night, it was just too exhausting and so I didn’t continue there either. 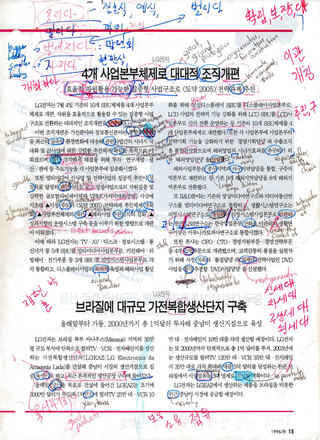 I picked up the Korean-language textbooks published by Yonsei University and worked through those in order to learn grammar. I also grabbed a few other grammar books with English explanations. I would go through these with a fine-toothed comb during the week and then with my tutor, we would do the exercises over and over in our weekly class. (After all, four hours of one-on-one study each week is a LONG time… sometimes, the classes felt like they’d never end. I’m sure my teacher felt the same way.)

In addition to the textbook vocabulary, I would find printed materials with information that looked interesting and read it. On the way through, I’d circle words I didn’t know and then look them up. After that, I’d transfer them to vocabulary cards/pages and carry those cards/pages around with me to review whenever the opportunity arose, such as walking to classes, waiting for a bus, etc. The graphic at right shows what I did to a page of the LG International Corp. company newsletter back in 1996; I still have hundreds of pages of notes like this which I created over the years.

I am not a great small talker and much less so when weighed down by the burden of trying to put together meaningful sentences in a language that makes little sense. So I missed many opportunities in the early days to use my Korean outside of the tutoring sessions.

Furthermore, trying to understand the TV, radio and church sermons was generally an exercise in futility, though I certainly gave it my best shot when I could. Reading the newspaper was almost as hard since, with so many unknown words, the reading was very slow indeed!

I did get one big language study break/opportunity early on, which is that I landed a job at LG International Corp., where I worked for almost five years. During working hours, I wasn’t all that busy, and though I was prohibited from speaking Korean in the office, my boss didn’t mind if I studied Korean at my desk when there wasn’t other work to do. I put this opportunity to good use.

** Click here to visit a page on Korea Business Central with links to Korean-language learning resources.