A few weeks back, I visited General Secretary Yong-Moon Kim, who runs the GyeongGi Province Association of Foreign Invested Companies (GAFIC) [EXPIRED LINK REMOVED:
https://www.gafic.co.kr/], to learn more about what the association does and I reported about it (as well as another related meeting a couple weeks later in Suweon) on a post to this weblog [EXPIRED LINK REMOVED: https://gyeonggiprovince.koreanconsulting.com/2010/04/about-the-gyeonggi-association-of-foreigninvested-companies]. 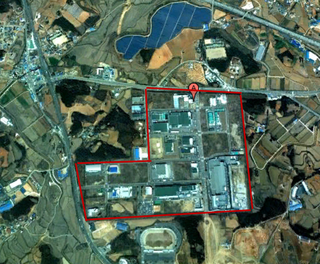 GAFIC is located in southern GyeongGi Province, officially in Pyeongtaek City, but actually about five miles west of the city within the Hyeongok Industrial Complex. It is dedicated to supporting the needs of foreign-invested companies in GyeongGi Province and I am a consulting committee member to the organization.

Hyeongok has sites reserved for foreign-invested companies and, according to materials published by GyeongGi Province, it focuses on companies manufacturing electronic parts, communications equipment non-metal mineral products and composite and chemical products. In the photo at right, the GAFIC office is at the “A” marker and the red line marks the outer border of the complex property. (Click here to see this map in Google Maps.) 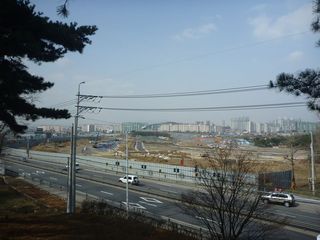 As I left GAFIC, I followed the roads north north-east until I hit Route 1 near Dongtan. This is a brand new city going up just south of Suweon and the street layout below shows clearly the planning that went into its design. (Click here to see the map in Google maps.) I wrote a short post last year about Ansan, the city in GyeongGi Province where I live and which was one of the very first new planned cities in the Seoul area. Dongtan is being built on a similar concept.

Dongtan City is slated as a terminal point on the future GTX transportation system [EXPIRED LINK REMOVED: https://gyeonggiprovince.koreanconsulting.com/2010/04/the-great-train-express-sounds-like-something-out-of-the-old-west], which will make it possible to reach destinations across GyeongGi Province by high-speed underground rail within about 30 minutes’ travel time from Dongtan. The above photo on the left was taken across Route 1 with Dongtan New City in the background. Note the construction underway in the foreground of the photo. 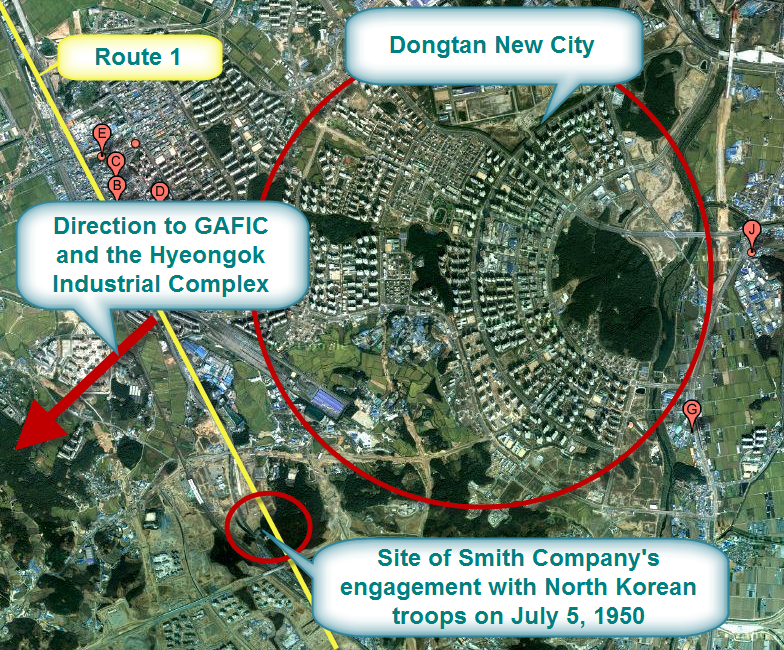 Having connected up to Route 1 west of Dongtan, I headed south about a kilometer to reach the UN Forces Korean War First Engagement Memorial, just north of the city of Osan (and south of Dongtan), which marks the spot of Smith Company’s defense on July 5, 1950 against the North Korean invasion of South Korea.

This is where I turn the article over to several relevant quotes from The Coldest Winter by David Halberstam. 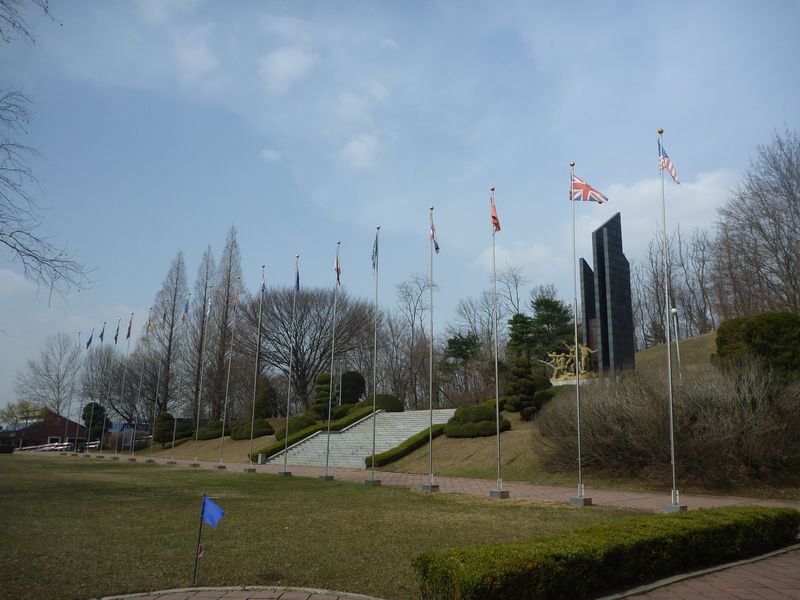 “What was about to unfold, as the Americans and the North Koreans rushed toward their initial meeting, was an American disaster of the first magnitude… On July 4, Smith took about 540 men, what was effectively an understrength batallion… a few miles north of Osan… They reached their positions about 3 A.M. on July 5.” (p. 146)

“The tanks kept coming — followed by a long line of infantrymen and then an even more terrifying site, another twenty-five North Korean tanks… the lead of the enemy column, later estimated to be about six mile long… The Air Force didn’t know where Task Force Smith was… (p. 147) 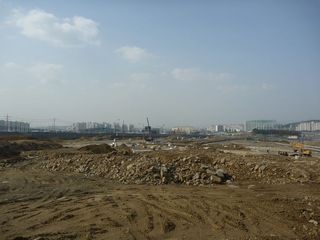 As I stood on the north edge of the memorial site, I looked out over the southern outskirts of Suweon and Dongtan New City; the photo at left shows my view. In addition to Halberman’s book, I had brought with me The Darkest Summer by Bill Sloan and The Korean War by Max Hastings and I read the relevant passages from each. I imagined the line of North Korean tanks rumbling south over the plain in this photo, and I tried to reconcile that image with the urban construction that now reaches the edge of the memorial park. It was hard to imagine this having ever been the remote location which marked the very first clash of the Korean War between UN (mainly US) forces and the North Korean invading army.

As I was just finishing up my reading, two busloads of American GIs pulled into the parking lot on a guided tour. Until that time, I had been virtually alone. As the Americans poured out of the vehicles, I finished up the last page, jumped in my car and drove off, taking note that the Americans in the buses demonstrate how even sixty years on, the effects of the Korean War are still with us. (Not to mention the recent attack and sinking of a South Korean battleship by North Korea, which took place after my visit that day. Click here for a discussion on Korea Business Central about the incident.)

As I followed Route 1 and drove back across the terrain the North Korean tanks had traversed in 1950, I was brought back to the present by the traffic jams and modern development all around. I ended up getting confused by the directions on my GPS, and took the long way back home to Ansan, approximately a 45-50 minute drive from the Smith Company battle site.