For some reason, I never really took much notice of the nationalism that pervades Korean society. I mean, Koreans are patriotic. But who isn’t? Where I come from, the US (well, Texas, actually) is the center of the world, so why should I be surprised by Koreans who think their country is where everything important happens? Koreans fly their flag, sing the national anthem and talk about their long history. Back home, we do the flag and singing things (not me, but most everybody else), though the history’s a bit shorter. The Korean sense of nation is just like everywhere, isn’t it?

Apparently not. And apparently this sense of nationalism is still as strong as ever so I can’t reconcile my ignorance of the obvious by just contrasting the “old Korea” with the “new Korea” and saying I missed out on the old version like I did recently in my review of The Koreans. As a result, Ethnic Nationalism in Korea was enlightening to me in many ways.

First of all, the Korean version of nationalism is based on ethnicity. In other words, Koreans define the greater Korean nation in terms of a shared bloodline. In today’s world, the fact that Koreans are of a single ethnicity is almost too obvious to need pointing out. But the basic premise of this book is that Korean nationalism that defines the nation based on this ethnicity is a product of factors in the modern era. Shin repeats often that the Korean ethnic nationalism of today was not a foregone conclusion but rather emerged out of the Korean experience.

Korean ethnic nationalism started as one approach to dealing with encroaching Western influences at the turn of the 20th century. With Japan’s annexation of Korea in 1910, pan-Asianism gave way to ethnic nationalism as a means of resisting Japanese cultural domination. Through the 1920s and 1930s, the ethnic nationalistic approach competed against international socialism — which divided society based on class, rather than ethnicity — as well as agrarianism.

After the colonial period, Korean nationalism had to deal with a divided nation and Shin describes the dynamics of this in fascinating detail. Since 1945, no Korean government on either side of the ideological divide has questioned the ethnic nationalistic premise. Thus, in spite of the radically different economic systems in North and South Korea, the underlying social justifications are remarkably similar. As Shin explains (p. 24):

“…the kind of nationalism developed in the South was quite similar to what appeared in the North. Both sides recognized ethnic unity of the Korean nation, accepted the premise of the primacy of nation over other cleavages, and competed over the legitimacy of their own system as representing the whole nation. Nationalism became a key resource in the politics of postwar Korea, both North and South, despite contrasting political ideologies and incorporation into competing world systems (communist and capitalist).”

Today, South Korea, as a nation, is justifiably proud of its achievements and this sense of “one race-one-nation” is as strong as ever. The book cover incorporates a photo of one of the most memorable demonstrations of Korean national pride: mass gatherings during the 2002 World Cup in Korea. We were there too and for a fortnight, I was an “honorary” part of this unforgettable Korean experience: 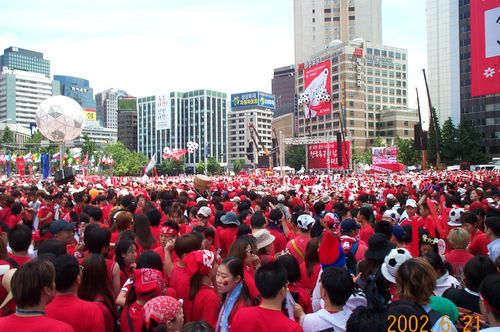 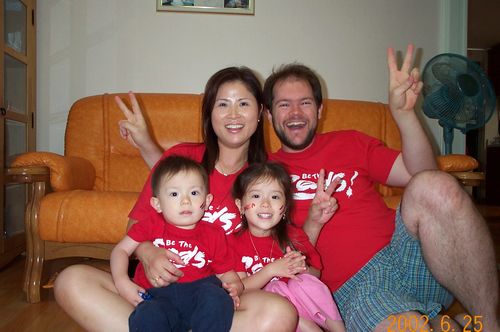 The author appears to wish Koreans had a more nuanced view of the nation; that they didn’t just assume history was what they think it is and that an ethnic approach to defining the nation is the only way. He does seem resigned to how things are though and acknowledges the constructive role nationalism has played and continues to play in Korean society.

Shin writes as a scholar and the reader should not expect to finish quickly. There’s even some statistical analysis of survey data and many references to literature by others in the field. I didn’t get lost in the concepts but came pretty close a few times. This book isn’t written for a newbie to the field and it assumes the reader has a background in cultural studies in general and in Korea specifically.

For the reader willing to make the effort, this book is packed with new information and insights about Korea and Koreans. I thank my associate, D. Bannon, for kindly recommending this book for my winter reading this year.