Thanks for the “Last Two, I mean, Three Weeks in Korea” newsletter today.
But do you really not understand why Koreans are demanding answers from the government over the Sewol tragedy? If you object to the government protests like that, your readers who don’t have a full understanding of the situation will think Korea is a nation of lawless and irrational street demonstrators and “impure elements.”
You suggest people should be protesting at the offices of Chonghaejin. But what good would that do? There’s nobody there, since the state’s already chasing those people down and throwing them in jail as fast as it can. Who would defend scum like the ferry captain, the crazy cult leader who runs the organization (and was already investigated in connection with a mass murder many years ago) or any of the other members of the greedy company?
But HS, are those crooks solely responsible for the tragedy? The world will always have folks who don’t give a damn for the lives of others; we don’t just sit around and let them kill people though. The government is responsible for safety oversight and rescue operations.
I didn’t need the Hangyoreh to point it out for me to sense that President Park’s public association of the ferry captain with the word “murder” just a few days after the event was very un-president-like. I believe murder requires a deliberate intent to kill but if President Park can expand the meaning to gross negligence, then let’s ask how many other murderers there are.
How about the Coast Guard that showed up on scene unprepared and did virtually nothing? They could have entered the boat themselves and rescued the passengers! Is that not gross negligence? The Coast Guard won’t release all the video footage of the time immediately after the sinking began. They’ve obviously got stuff to hide. Then there’s the Coast Guard control tower on Jindo that didn’t bother to check in at all with the boat passing by and where employees were later found to be destroying evidence. 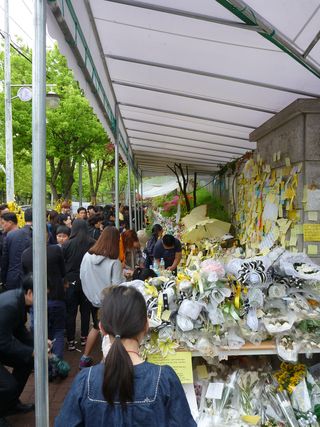 Would the boat have even capsized in the first place if corrupt government officials had not been allowing it to operate far in excess of legal weight limits?
If the lifeboats had deployed, the passengers would have been evacuated and saved. What officials turned a blind eye to the corrupt safety inspections that lead to broken safety equipment?
The government outsourced the rescue to a private salvage company called Undine that was more interested in its own commercial privilege than rescuing passengers. How else do you explain it taking nearly a week to even enter the damn ferry? No litany of excuses about how cold or fast or muddy the water was will convince me that all the resources of the country were focused on the rescue in a timely fashion.
I’d also like to know how the authorities could herd the families of the missing into a gymnasium in Jindo and leave them there out in the open for days, while letting the media sit up in the balcony filming them 24 hours a day. I have asked myself what that would be like had I just suffered the loss of a child.
After such tragic loss, followed by humiliation day after day, what do you really expect from the families of the deceased? My wife visited an acquaintance a few days ago who lost her daughter in the tragedy and is now in the hospital, a nervous wreck. Her daughter’s body was found with fingernails all torn up from trying to claw her way out of the sinking tomb. I can’t think of anything sadder.
President Park showed up in Jindo the day after the event to say she’d do everything she could. Maybe she did; I don’t know. But from what I’ve read, she didn’t really know what was going on for almost ten hours after the sinking started! Someone asked me recently if I thought President Park had done a good job dealing with the crisis. As an American, I’m not sure we’d expect more from our president in a situation like that (which is probably why President Bush weathered the Hurricane Katrina disaster as well as he did) but Koreans clearly do, especially when the system failed at so many levels and this resulted in such loss of life.
At this point, I’m not sure what another apology from the President would do, but don’t you think a proper accounting of the government’s responsibility in the tragedy is in order? Can we let the forces on the Right just keep saying it’s all the result of the actions of a few?
BTW, I don’t know why you say the Left is “impure”; then the Right is “pure”? Some of my dearest friends and associates in Korea are on the Left and I swear, they are good people.
Of course, the opposition will try to topple the current administration; that’s their job! I’m not saying they are right or wrong, but do you think they have forgotten their (perhaps biased… perhaps not) memories of the years of JH Park, DW Chun and TW Roh? Or the actual overthrow for awhile of MH Noh and then his destruction after leaving office?
For whatever reason, politics is a battle and it’s election time.
I don’t think anyone who aspires to be president of a nation has any right to feel indignant about criticism in any form. The best way for President Park to overcome the challenge is not to portray herself as a victim of harassment and/or hit back at the protesters but to properly do her job to investigate and clean up the system, if she can. It seems to me that the pressure needs to be kept up, especially as President Park’s response has been so tepid and her determination to see it through in doubt.
Steven