Korean Views on Japanese Society and Economy are Changing

Japan is a popular topic of discussion among Koreans. The themes used to focus mainly on a) how bad the Japanese were during their 34-year colonization of Korea and b) how advanced they are and that it would really be nice to catch up.

Today, the tone is much different.

Koreans still talk about how much they resent the Japanese colonization, but now that Korea's on a roll with the success of its economy and popularity of Korean culture throughout Asia (and even in Japan), and as Japan's still working through its 20-year funk, Koreans are gaining quite a bit of confidence in their analysis of Japanese society and economy and where it's all going. 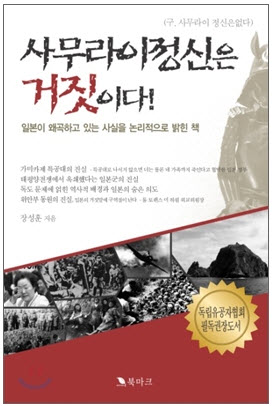 I remember seeing the Korean book on the right at the bookstore recently denying that the Japanese "samurai" concept is anything more than a modern myth (사무라이정신은 거짓! – The Samurai Spirit is a Lie!). A recent study by Citigroup estimates that Korea will have the 4th highest per-capita GDP in the world in about forty years (and far higher than Japan). I often hear about how the Japanese are "becoming soft" and how they've lost their motivation to succeed, as exemplified by the opinion of one Korean I heard say that Korean young people and Japanese young people don't have a lot to talk about because Japanese young people are more concerned about part-time job working conditions than they are about developing their careers. I even came across some discussion online recently about some Western fortune teller who predicted that Japan will become a Korean colony within the next thirty years; of course, this prediction was met with a lot of interest and enthusiasm by Koreans.

Recent Korean opinions about the Dokdo Island issue are pretty uniform; I have yet to find a single Korean who can express with any sympathy the Japanese argument for why the islands historically belong to Japan. The closest I've heard is the position of a professor at Hanyang University saying that because so much of Korean culture and so many Koreans (commoners, royals and artisans) emigrated to Japan over the past one or two thousand years or so, Japanese see Korea as their long-lost half and so they can't understand why Koreans behave with such independence if, in reality, they're the same people. Thus, on this argument, Japanese claims on Dokdo boil down to the idea that it doesn't really matter whether Dokdo was a recognized Korean territory long ago or whether the Japanese rightly claimed it in the late 1900s; the Japanese are just claiming what's been theirs all along.

One point I can't quite get a clear viewpoint on is whether Japan is still ahead of Korea or not. According to a recent article mentioned on Korea Business Central, the Korean standard of living is on par with that of Japan. But more commonly I hear that the Japanese economy is 4-5 times larger than the Korean one and that Korea is still decades away from catching up on a per-capita GDP basis.

In a recent conversation, the opinion came up that Japan is turning inward, as Korea is becoming more international (and in particular, more like the US, which is an assertion I hear quite a bit). When I pointed out that, from what I've heard, Tokyo is a lot more cosmopolitan than Seoul, I was told that this is only a surface thing and that the Japanese maintain a distance between themselves and anything foreign… or else they find a way to make that foreign thing Japanese. I tend to think a good number of non-Koreans would say the same things about Korea, but my point here is to draw the distinction between the Korean view of themselves and their view of Japan.