eBriefing: “Answers to Top Questions about Business Visas in Korea” 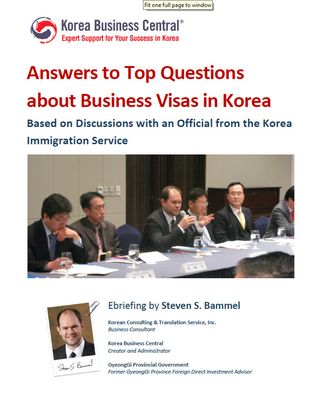 Jared Muloongo–intern on KBC and job-seeker in Korea–and I are working to figure out some key information about the visa situation in Korea in order to share it with our members on KBC.

Based on the recommendation of my associate General-Secretary Yong-Moon Kim of the Gyeonggi Association of Foreign-Invested Companies [EXPIRED LINK REMOVED: https://www.gafic.co.kr/], and through a couple people I worked with at InvestKorea last year to put together the KBC interview with Comissioner Hank Ahn, I was able to get in touch with the official from the Korea Immigration Service who is currently dispatched to InvestKorea to advise on visa matters for foreigners investing in Korea.

I visited his office today with a bundle of questions and the following are the answers I was able to get.

What are the visa options for foreigners who want to work in Korea in non-executive positions which are not teaching/ESL positions? (ex: E7, D8, E9, D9…)

To answer the specific visas mentioned in the question:

What can you tell me about an E-7 visa? What are some of the requirements for this visa?

The key point of this visa is that it’s for foreigners working in positions in Korean companies which the Korean companies have demonstrated to the satisfaction of the Korea Ministry of Justice cannot be filled suitably by Koreans. (This is the reason most former ESL teachers who have gone from the ESL visa (E-2) to a E-7 visa are still working in language-related tasks.)

What is a D-4 visa for? What kinds of interns get this visa? Is it only at investment companies?

The D-4 visa has a very specific purpose. It’s for the foreign local employees of the overseas branches and subsidiaries of Korean companies who wish to bring the foreign workers to Korea for on-the-job training. It is not a visa that can be easily issued under the sponsorship of a Korean company or otherwise to just any foreign intern.

Can you briefly explain what the E-9 visa is for? Who can apply for this visa and what are the requirements to qualify for this visa?

This visa is for foreign laborers (particularly those from Bangladesh, Pakistan, Vietnam, the Philippines, Indonesia and a few other countries) willing to work long hour in dangerous and dirty conditions for very low wages (currently about W900,000/month is average, or so I’ve heard). You don’t want this visa.

As I understand, the E-9 and H-2 visas are available only to persons from countries which have signed agreements with Korea for these visas. The other visas depend on finding a company or organization willing to sponsor, and which can also persuade the Department of Justice that they need the specific foreign employee and will properly take responsibility for that person. Also, as Korean companies now have to pay into four kinds of national insurance/workers compensation plans even for foreign workers, this can also be a significant burden, both in terms of costs and paperwork hassle.

How long does it take a candidate in Africa to have their visa procesed? What are some of the best places to have your visa processed quickly and efficiently?

I don’t know, but the official at InvestKorea did say that the visa issuance isn’t a country-based thing. No doubt, citizens of certain countries will have an easier time of it, but there aren’t specific regulations that would affect this.

If a company states that an individual they are hiring must get their own visa, what recommendations would you make to the individual? How can they get a visa without sponsorship?  What visas would you recommend for people coming to do business in Korea, especially if they want to invest but are below the $200,000 dollar mark?

Certain visas are available without a company sponsorship, don’t require a ridiculously high investment or export record and allow the foreigner to work in Korea. They include the following.

What are the process and minimum requirements for a Korean company to sponsor a foreign employee?  What conditions must the foreign employee meet in order to get a work visa? Can an individual ever sponsor the visa of another foreigner without being family? Is there a way to work legally as an intern in Korea without having one’s visa sponsored by the interning company? Are there any loopholes that would legally allow someone to work in Korea without having a business visa?

There don’t appear to be formal minimum requirements for a sponsor, but the company has to find a way to persuade the Ministry of Justice that the visa is warranted and that the company will take full responsibility for the employee. Apparently the representative of the company must take personal liability for the foreign employee.

I asked if I, as a foreigner with a non-corporation company in Korea, would be able to sponsor a foreign employee. The official said that, in theory, it’s permitted, but that it would be very hard to persuade the Ministry of Justice to award one in this case. So basically, the visa sponsorship process is just a matter of persuading the government that it’s necessary but there aren’t formal conditions; in some cases it’s easier than in others.

The only way to work legally in Korea without a sponsored work visa is to get one of the non-company-sponsored visas mentioned above.

Can you explain about the visa points system?

I found this PDF online which explains it [EXPIRED LINK REMOVED: https://koreanconsulting.typepad.com/files/pointsystem.pdf] .

The fastest way to get through is to prepare the paperwork and submit it properly. The official told me that Korea doesn’t have attorneys specializing in immigration work; I guess there’s just not that much work to warrant it and the Korean system appears to be a little more approachable than the US immigration, which is a black box. Most visa information is available at Hi Korea [EXPIRED LINK REMOVED:
hikorea.go.kr]. Foreigners should also be able to get free help from offices like the Seoul Global Center (which I believe has a free hotline for questions).

I asked if there was a document which explains all this in one place (including a comprehensive list) and in English and the official said there isn’t. He did give me a Korean-language print-out listing all the visas and their summaries which he said don’t exist in English, and much of the information provided in this article is based on that document, in addition to my discussions with the official.

If your visa application is rejected, can you apply for another visa type? If your visa is rejected for not having the correct documentation, can you reapply or is there a specific waiting period?

I didn’t specifically ask these questions, but based on what I learned, I would say that the Korean system is quite flexible, with discretion for the government officials, and doesn’t automatically lock people out for set periods of time. However, if one is rejected once and then applies again without improving the application, the officials will notice the previous record and are unlikely to award the visa the second time, either.

Thus, in terms of recommendations for a foreign entry-level job-seeker in Korea who doesn’t have the option of ESL teaching, or other short-cuts (such as marrying a Korean), here are what I’ve come up with as options.

Other than these, there’s the E-7 visa which can, in theory, be obtained from abroad. But without coming to Korea first, it’ll be hard to find a job and compete in the application process with others who are already in-country. In addition, the company still has to persuade the Korean Ministry of Justice that the prospective candidate brings skills/expertise that they can’t find from the tens of thousands of Korean graduates who also can’t currently find a job, and it’s really not reasonable to ask a Korean company to make this case to the Department of Justice for an entry-level job applicant whom they haven’t met before.

Tags: get a jobKorean Business Driversstart and run a business