Kolkata, The Koreans, Samsung, Michael Breen and the Rest of Us Expat Patronizers 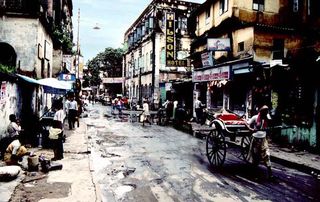 On Sudder Street in Kolkata, India (see photo at right, which is not mine; click to see original page [EXPIRED LINK REMOVED: https://pages.cthome.net/india2/]) in late 1989, I formed my most vivid memory of anti-Americanism. I was having breakfast at a small coffee shop frequented by foreign backpackers and the room was crowded so there were multiple strangers to a table. Somehow – and I don’t remember the details at all – I got into a political discussion with a guy from France. He was criticizing something about the US government and I took umbrage to it. I was naïve, sure – should have known better – but there was something about others attacking my country that really rubbed me the wrong way that day. Before I knew it, the entire coffee shop of mainly Europeans was in an uproar and I ended up leaving without finishing breakfast.

That was me, an American in India, getting upset with what others were saying about my country; imagine how the average American would feel if, say, a Brit came to the US, lived there for three decades, wrote a book explaining the American psyche to non-Americans and got himself a column in an American newspaper where he published patronizing and, at times, insulting analyses of US society?

I already shared my opinion about The Koreans: Who They Are, What They Want, Where Their Future Lies by Michael Breen back in January. (Click here for my book review…. Incidentally, Breen’s a Brit who’s lived in Korea for about 30 years, wrote a book and authors a column for a Korean paper.) In my article, I was pretty critical of Breen’s stereotypical expat-oriented approach to explaining Korea and Koreans.

But in fact, before reading the book, I’d never heard of Mr. Breen. This isn’t his fault though; it’s more indicative of my isolation from expat society in Korea since Breen’s the “real thing” when it comes to long-term expats in Korea.

My second experience with Mr. Breen was just a few weeks ago when I picked up a Korea Times newspaper looking for information about classified advertising. I realized then that he writes a column for the newspaper and the article I read there [EXPIRED LINK REMOVED: https://www.koreatimes.co.kr/www/news/opinon/2010/05/170_63031] was about Korean-American Robert Park’s illegal entry to North Korea to protest against the regime. Breen challenged Koreans with this (paraphrased) question: “Why do Koreans care so much about Dokdo while North Korea is murdering millions of citizens and testing nuclear weapons? If the answer is that Koreans aren’t willing to stand up for important issues themselves, then they should at least be grateful to the foreigners that do it for them.”

OK, fine. It seemed a little edgy and moralizing, but the point was worth bringing up; and surely outsiders have a role to play in bringing fresh perspective into the understanding of Korea. But my respect for Breen’s commentary here is diluted by a lot of what he said in The Koreans. And as it turns out, the Robert Park article apparently was not Breen’s worst.

Back in December, Breen published a piece in this same Korea Times column ridiculing corruption in Korea through a satirical spoof. In particular, he made fun of Samsung Chairman Lee Kun-hee. The column has long since been removed from the Korea Times site I’m sure, so I can’t provide a link to it now. But here’s a link to an article about Samsung’s reaction [EXPIRED LINK REMOVED: https://www.kentucky.com/2010/05/11/1260190/a-south-korean-libel-suit-shows] , which included a $1 million civil suit against Breen for libel. And just today, the LA Times reports that Samsung is dropping its civil suit, but that the criminal case is still pending. (Funny I didn’t read about any of this in the Jungang Ilbo…)

So this leads me to recount another experience from my teenage years. I remember once I was doing the typical adolescent thing with a friend, which was complaining about my parents. I don’t remember the details, but I’m sure I wasn’t being nice. I was having a great time until my friend started agreeing with me… and adding more criticisms of his own. Huh? Suddenly my perspective changed. I immediately circled the wagons and became my parents’ best defender.

OK, so there you have it. Koreans are adolescents that don’t like their family being criticized by others even though they feel the right to criticize themselves. And their leading companies run roughshod over free speech to protect their reputation. But is this true? Is it only Koreans who would appreciate a little sensitivity to criticism, especially when some of it is rubbish from foreigners living in their country? Besides, doesn’t the UK have libel laws? Granted, the bar for libel is surely set higher in the West, but so what? Did Breen come to Korea to bring the ROK “up” to the level of his own glorious home country? What’s “up” really mean?

In fact, I’m often surprised at the level of interest we non-Koreans have in the thought processes of the “natives”. It’s certainly true for me; I never gave a moment’s notice to what makes Americans tick while I was growing up, but the day I got off the plane in Korea as a 23-year old, I felt I had something to contribute to understanding the Korean psyche.

Here’s an example of the nonsense that went through my head:

Um, OK. As I see it now, the very premise of the question is flawed. But this is the expat experience and I don’t know that we ever get through it completely. I still try to figure out Koreans and there’s a category on my blog entitled “Understanding Koreans [EXPIRED LINK REMOVED: /the-korean-mind/]”. How far do we take it though? I was talking with someone recently who said that she thinks Koreans need foreigners to explain their psyche to them since they don’t properly understand themselves. I mentioned this to another expat later… and he agreed with HER! It’s a good thing we Westerners have such clear thinking about ourselves. After all, Socrates said, “Know thyself” but no Eastern philosopher’s ever said anything that profound, right?

I might also point out one more relevant item here. Samsung wasn’t bashful in going after Breen, but there’s a Korean who’s pretty much saying the same thing (actually far worse, and not with satire either). Former legal counsel to Samsung, Kim Yong-Chul, has published a tell-all book entitled Thinking Samsung and the story is described in this New York Times article [EXPIRED LINK REMOVED: https://www.nytimes.com/2010/04/26/technology/26samsung]. Samsung isn’t saying a word about this book officially; no lawsuit… Even the mainstream media in Korea isn’t touching it (though it is for sale here.) I find it interesting that Breen’s case, while not being trumpeted, hasn’t been buried in Korea like the Kim Yong-Chul book story.

Anyway, as I reach the end of this post, I find it very hard to write the conclusion. Any admonition to Mr. Breen to avoid moralizing and patronizing prognostication about Korea reminds that such an exhortation would be tinged with hypocrisy.

So here’s the best I can do: In the words of Rodney King, another deep thinker whose situation in 1992 eventually lead to rioting in Koreatown in LA, “Can’t we all just get along?”