Searching for the Meaning of 체하다 in Korean

Background: How it All Started

Koreans are forever referring to a digestive problem called “체하다”. I’ve always wondered if it’s just “indigestion”? Or something more? All I could decipher is that it seems to happen for no good reason.

Google Dictionary is no help: 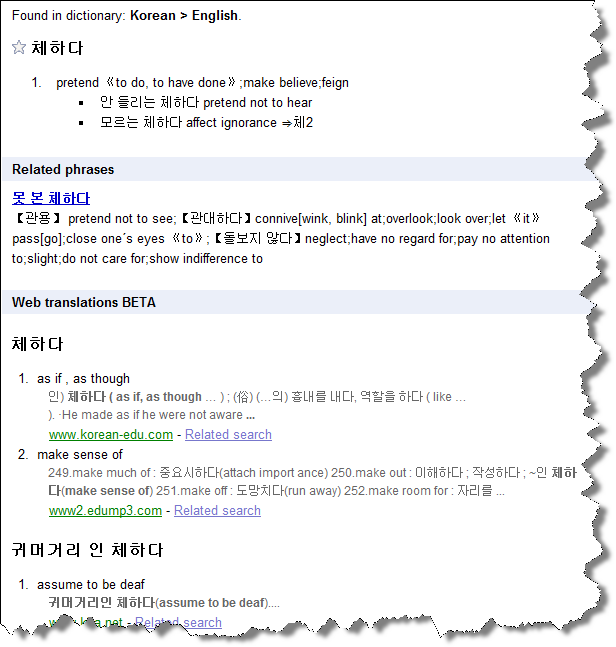 Yahoo! turns out to be more on the mark:

Phase I: My First Stabs at a Meaning

A colleague of mine suggested that it’s a catch-all for “You’ve got an upset stomach” but he also admitted that the Korean usage of the term is so broad that pinning down the exact meaning is hard. He also wasn’t asserting that 체하다 is actually “upset stomach”.

Besides, probably the best translation for “upset tummy” is 속이 않 좋다 since in the Korean mind, 체하다 implies a diagnosis of a specific digestive condition.

For example, if my son throws up, I’ll hear Myunghee saying something like this to herself later: “왜 그랬지? 체했나?”. Then she’ll run down the list of foods he’s eaten in the last few hours to try to determine which one caused it.

If we translate 체하다 as “upset stomach”, then we’d have to translate her comment as “Why did that happen? Did he have an upset stomach?”. Well, duh… The question isn’t whether he has an upset stomach, it’s the question of what caused it. And in this case, 체하다 gets blamed for a lot of upset tummies, but it’s not the condition of the upset tummy itself. This is why I keep getting stumped on the exact meaning in English.

At that point, I was suspecting that we just don’t recognize this particular medical phenomenon in the West and that it’s one of those things Koreans have invented. It’s certainly a catch-all phrase, but it appeared to be a catch-all for various causes of upset tummy, and not the upset tummy itself.

I shared the above thoughts with my colleague and he kindly send me this English translation of a reply from a Korean pharmacist:

체하다 needs something to act on it: that is, an object for the verb.  When customers complain of 체하다, they are complaining of a symptom, usually a blockage in the stomach caused by some outside source.  It is not just overeating or acid reflux; that is incorrect.  This blockage is not constipation.  It is a general sense of gastrointestinal unease due to poor digestion.  Certain teas can relieve the symptom of 체하다, but the causative element must be discovered for a long-term cure.  I would define it as follows [the following written in English]:  “The definition of 체하다 is dyspeptic (suffering from dyspepsia): gastrointestinal unease due to poor digestion brought on by ingesting incompatible elements.”  [She then inserted this English-language link]:  https://medical-dictionary.thefreedictionary.com/dyspepsia

He also gave me this insight:

However, 체하다 seems to be used MOST often in relation to overeating (과식하다) or binge eating (폭식).  That is, when the digestion isn’t moving along nice and comfy (소화가 안 되다), usually from eating too much or too fast or both.  I’ve heard it used for acid stomach (위산), too, and acid reflux (위산 역류), once from a friend whose meds made her stomach awful, and even just an equivalent of “my tummy’s blech” — but I suspect the most common usage is the bloated ugh feeling you get after eating too much or too fast.  Allow me to say that this is strictly my inferred meaning from experience and not an exact definition.

“Blockage” seems to be a key word here… In fact, when I pestered Myunghee about it some more on another walk last week, she finally got exasperated, picked up some pine needles in her hand and asked me if we were to throw these into a sieve (a 체!), would they get caught in the mesh or slide right through?

And that’s when it clicked for me.

체하다 really refers to a condition where food gets stuck in the stomach.

Of course, that begs the question as to whether it’s even medically possible for food to “get stuck”…