Nojeok Hill, My View from the Top – Is Ansan an International City? 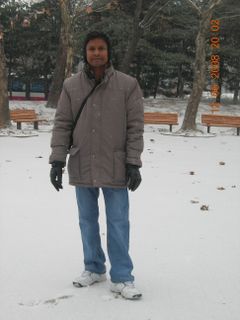 This is Hasan, a friend of ours from Bangladesh who is living in Korea. We took this photo in our neighborhood near the foot of Nojeok Hill. Myunghee met his sister in Texas while studying English together several years ago but the sister’s US visa ran out and she returned to her home country in 1995. In 1996, Myunghee visited the family in Bangladesh for almost a week. While she was there, Hassan was her “tour guide”, showing her around the area where they live, but communication was difficult because his English-ability is limited.

Unbeknown to us, shortly after Myunghee’s trip, Hasan applied to work in Korea as a foreign laborer. It involved a bribe to a Korean bureaucrat or official fee (we’re not sure which) in the amount of about $5,000 (a huge amount of money there) to earn the privilege of coming to Korea to work. He also studied Korean for a year in order to increase his chances of being selected for the Korean work visa. It seems that there are far more applicants for these work positions than there are positions.

He called one day about a year ago to notify us he had arrived; we’d heard through his sister that he might be coming, but we didn’t know when he was going to show up. His year of Korean study had paid off as communications with him are much easier now that we can all speak Korean together.

There are tens of thousands of foreign workers in Korea from various countries. And it turns out that Ansan is the city in Korea with the highest number. According to an article in the Jungang Ilbo last week [EXPIRED LINK REMOVED: https://article.joins.com/article/article.asp?total_id=3806320], approximately 35,000 foreigners are living legally in Ansan and another 35,000 or so illegally. Of these, by far the most are Chinese, followed by Indonesians and Vietnamese. Most come to live in the area around Ansan Station, which is far from our neighborhood. And most of these foreign residents are providing labor for the factories that sprawl through the the Banweol and Shihwa Industrial Areas, south-west of Ansan and south of Shihwa City.

At current exchange rates, foreign workers coming to Korea can expect to earn the equivalent of about $800-$1,400/month for 40-60 hours/week of work, as well as living accomodations, which are often very basic. And most foreign workers send between 60-80% of their earnings back to their home country.

It was only 20-30 years or so ago that Koreans were going overseas (mostly to the Middle East) to labor on construction projects. The fact that Korea is now hosting hundreds of thousands of foreign workers to fill the need for unskilled labor, even during the current economic difficulties, is testimony to the prosperity that Korea enjoys today.

See the map below for orientation to the Ansan area: 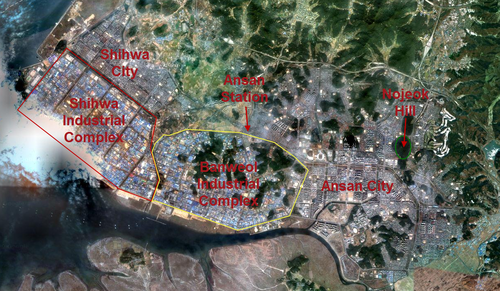