This article provides a framework for understanding context for Korean business cards, and basic business etiquette guidelines, as well as instructions for translating and designing your business card in Korean. 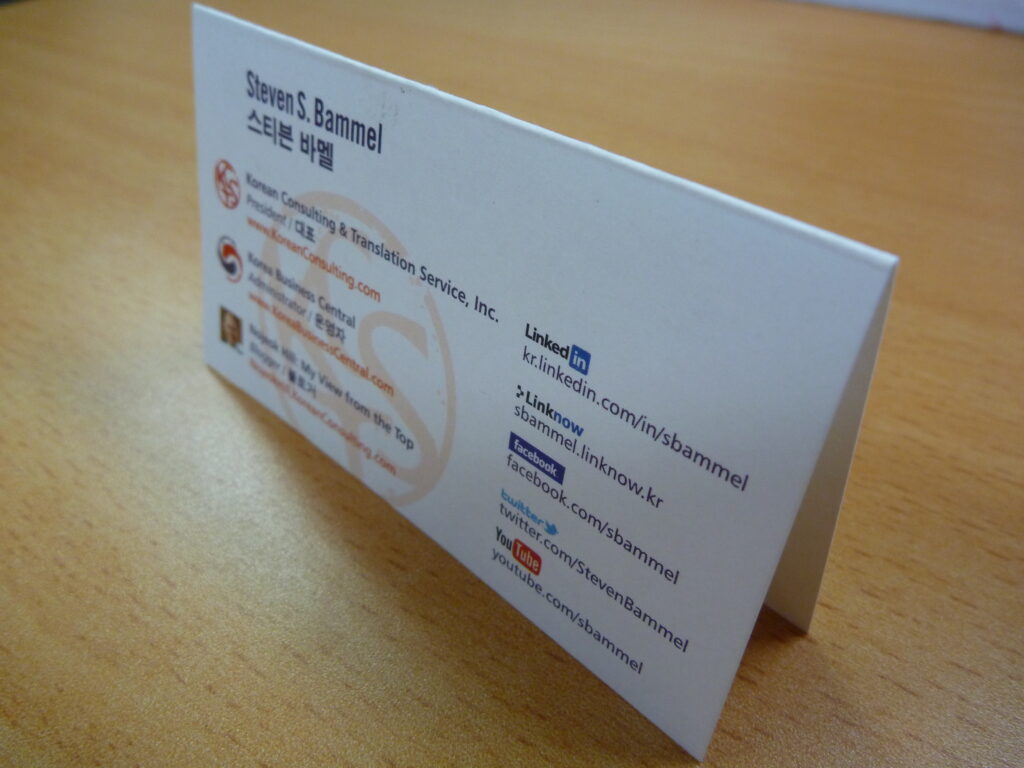 A Korean business card can make all the difference to your results in Korea.

Why business cards are essential in Korea

Job position is the basis for business interactions.

The primary reason business cards are so important in Korean business is that they communicate the position of each person within this business hierarchy. Rank is built into the social fabric of Korean society, and you cannot ignore this important fact if you expect to successfully promote business here. Though rank in Korea can be based on many things, in business it starts with job position.

Hierarchy is even built into the Korean language.

Probably one of the hardest areas of language for foreigners to grasp when learning Korean is the various ways in which Korean requires the speaker and listener to understand and express how various players fit into the social hierarchy. This is far more complex in Korean than the “tu/usted” concept of Spanish; Korean speakers must remain aware of and reflect the relative positions of the speaker, listener, and 3rd persons discussed at all times.

Indeed, there is no “neutral” way to communicate in Korean and you cannot properly utter even simple sentences or greetings without the implication of respect or disrespect.

Business cards are a must.

Therefore, if you are living in Korea or visiting Korea on business, you will soon find that business cards are essential.

I’m not going to tell you that your English-only business cards won’t work (in fact, they’re better in Korea than your Chinese/English or Japanese/English cards), but Korean/English business cards will demonstrate to your potential Korean partners that you are serious, and that you understand and respect their culture. This small effort on your part establishes trust and maximizes your opportunity for excellent results.

Therefore, I strongly recommend that you carry double-sided English/Korean business cards with you on business in Korea and with Koreans anywhere.

How to exchange business cards with Koreans

Exchanging business cards is part of the introduction process. Be ready with the following useful tips!

How to translate your business card into Korean

The following list of best practice approaches to translating each of the elements of a business card to Korean should not be regarded as the
“ONLY” way. There is no standard method and so feel free to customize your translation and design to your situation. Also, if you do not have a Korean resource to work with on the translation of your business card (or other materials requiring Korean business translation services), then contact me. I’ll get the work done for you quickly and painlessly!

Transliterate your name phonetically into Korean characters in the order of your first name, middle name (if you use a middle name) and last name. Koreans know (or at least, should know) that Western names are sequenced backward to the Asian order and if you try to turn your name around to match the Korean name order, it will only make things more confusing. If a recipient of your card is having trouble figuring out which is your first name and which is your last name, then you can tell him or her.

If you use a middle initial, leave it in English or drop it out completely. Another approach is to write out the pronunciation of the middle initial letter in Korean, but I don’t think this looks as good as leaving the initial in English.

Punctuation between names is the same for English and Korean. Note that when localizing English names into Japanese and Chinese, it is pretty common to put a centered dot between names, instead of a space. But this is not the best approach for Korean cards.

Job titles can be the hardest part of translating a business card. This is because 1) getting the title right is very important and 2) titles don’t always transfer one-for-one between languages, especially in the case of Western companies that have moved to a flat organizational structure.

The goal in translating the job title is to ensure that the recipients of your business card see you to be at the same place and level in your company’s hierarchy as you want them to see you. In some cases, this is not hard; but certain job titles are particularly problematic, as explained below.

Likewise, there are plenty of cases where the purpose of a business trip to Korea is specialized enough that you may want to customize your job title for the trip.

For example, a “Vice President” of the company may want to go as a
“Director of Marketing” to be in line with the trip’s objectives. Keep in mind though that your Korean counterparts will form their impression of you based on both the English and Korean sides of the card, so the two should be in agreement, or kept strategically vague.

The standard handling of professional designations in Korean is to put them in front of the name and in a smaller font. This is not a hard-and-fast rule though and so you have a lot of flexibility in choosing where you want to place these.

When suitable translations exist, they are best translated. However, many specialized fields have their own unique designations and if this is internationally recognized within the field, it often makes better sense to just leave it in English. However, a professional designation left in English and placed in front of the name does look a little unusual.

The decision of where to put a professional designation gets even more confusing if someone has two, and one of them is translated and one not. To put one in front of the name and one after the name would be doubly unnatural.

In fact, for this reason, it often makes best sense (and doesn’t matter at all in terms of communicating meaningfully to the card recipient) to just place any and all professional designations after the name, as per Western style. Koreans often do this, too.

It is better to leave some company names in English, particularly those with initials, such as GE and IBM. In many cases, a company would just rather its name remain in English for the unified branding effects, too. However, I like translating company names when appropriate and I follow these rules when approaching the subject:

If you determine that you will use a Korean translation of the name, find out first if your company already has a translation of its name in use, and if so, use it. However, if your company’s name does not have a pre-existing Korean translation, first try to translate according to meaning. Company names based on the name of their founders or other proper nouns often cannot be suitably translated and in this case, they should be transliterated phonetically. Some company names can be a combination of translation and transliteration.

For example, the governance structure of a corporation in Korea is somewhat different than in an American one, thus “Representative Director” is generally used to refer to the top person in a Korean corporation, whereas “President” or “CEO” is the top position in US companies.

On the other hand, if translating to a Korean company form raises red flags, then the best approach is to transliterate it phonetically.

It is fine though to translate a non-Korea address to Korean if the English side of your card already has the address written in English. In this case, having it in Korean on the Korean side can help Korean readers with the pronunciation of your address, as well as make the Korean side look more “Korean”.

Many logos are untranslatable pictures. But other logos contain words, usually in English. This doesn’t have to be the case though; translated logos can really add a nice flair to a Korean business card. The challenge here is having your designer work in a graphics program to recreate the English logo with Korean characters. This can be very hard, depending on the logo.

You should usually translate company slogans and tag lines and other similar text to match the meaning of the original English, especially when you consider that these slogans and tag lines are often a key device for communicating what a company does. However, when the slogan/tag text is a marketing phrase with a double-meaning in English, you may need to call on a good translator to think through it and come up with something in Korean that, though not a literal translation, still communicates the desired meaning.

How to design your Korean business card

Designing a business card for Korea is an art, not a science. There are no hard-and-fast rules about how to design a Korean business card and nothing that says a non-Korean’s card must be made to look like what a Korean designer would make.

In fact, the most common and simplest approach to creating the Korean side for a business card is simply to use the exact same layout of the English card, but translated to Korean.

However, there are more creative approaches which can be taken too. I, personally, don’t even carry a two-sided business card where the front and back are identically formatted. Instead, I cram all of my information in English and (some) Korean onto one side so that the back is available for additional information. This is a common approach that Koreans take, though I get occasional comments that my business card looks too busy.

Keep in mind when preparing your business card that just using a logo pulled off a webpage will generally not print well. Standard web resolution is 72 dpi, but for adequate print quality, 200 dpi is an absolute minimum; 300 dpi is better.

A lot of Korean business cards do put both the English and Korean on the front and use the back for some other purpose, such as with my card. I see a lot of Korean cards with a map to the office on the back.